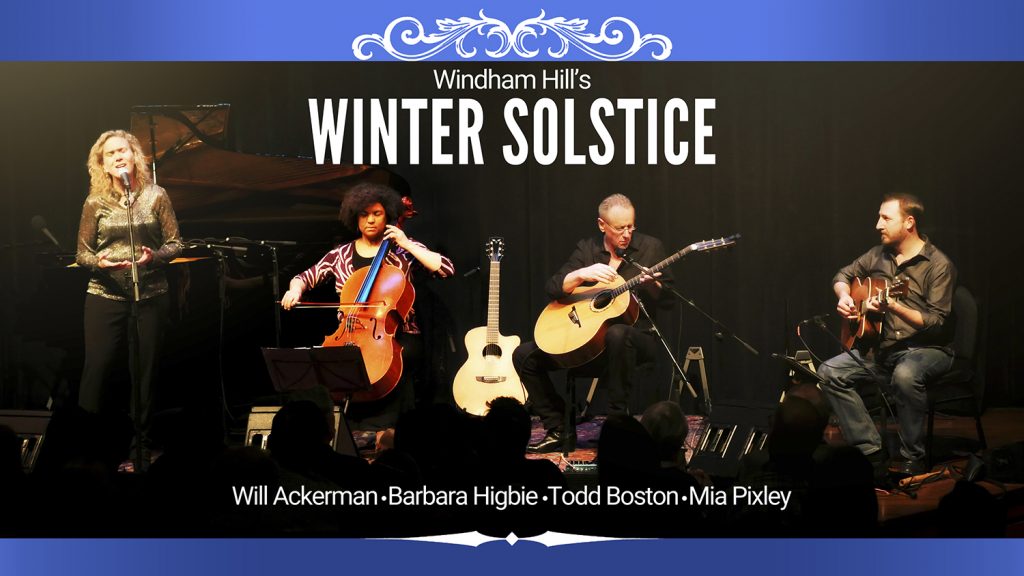 Universally recognized as the preeminent pioneer in the new age music movement, and the founder of Windham Hill Records, Will Ackerman’s career spans more than three decades of remarkable vision, single-minded determination, fervent business savvy, and “a thorough love of the mystery of making music.” The glory years at Windham Hill with Ackerman at the helm launched the recording careers of an abundant list of acoustic instrumentalists, many of whom became household names. The primary influence Windham Hill cast on contemporary music over the last three decades of the 20th century emanated from folk roots, the acoustic guitar, and the piano. This legacy remains with Ackerman in a uniquely prolific and peerless career.

Barbara Higbie is a Grammy-nominated, Bammy Award-winning pianist/composer/ singer songwriter as well as a championship fiddler. The Los Angeles Times described her music as “a ray of bright sunlight,” and the San Francisco Chronicle calls her “full of life and brilliant in her playing, the most exciting musician we’ve heard.” In addition to being the first female instrumentalist on the Windham Hill label, Higbie has appeared with musicians as di erent as Santana, Bonnie Raitt, the Kronos Quartet, Milton Nascimento, and Spyro Gyra, recording on over 100 CDs.

At 23, Higbie recorded her Windham Hill 1982 duo release Tideline with violinist Darol Anger, which garnered a four-star review in Downbeat magazine. In 1984, she co-led a group with Anger including Mike Marshall, Andy Narell, and Todd Phillips to record Live at Montreux. The group became the Montreux Band and toured internationally for 12 years. Higbie’s composition “To Be” became a radio staple of the 1980s, a TV theme song in Italy, and a video with heavy rotation on VH1. Her early Windham Hill titles have recently been reissued on Adventure Music. Higbie’s solo work has made the top ten lists of the Washington Post and Performing Songwriter magazine. The most recent of her six solo releases, Scenes from Life, was recorded in 2014 at Lucas lm’s Skywalker Sound.

Music is truly something special that connects us all which is why I have dedicated my life to creating and sharing Music that is positive and uplifting. My hope is that in my Music you will find a sense of connection, support, depth, optimism and peace. May this Music serve to help you to connect to something deeper inside of you, to feel connected to your heart and to listen deeply.

Austin, TX native, cellist, singer, and songwriter, Mia Pixley is a recent graduate of San Francisco Conservatory of Music. Mia and her cello have collaborated in Off- Broadway theater productions, film, recordings with grammy award winning artists, and performance art compositions. She recently released her first solo EP, titled “Inside Under”, under her solo project name, Baeilou. Mia is thrilled that she gets to play with Barbara Higbie and company for the Winter Solstice Tour.