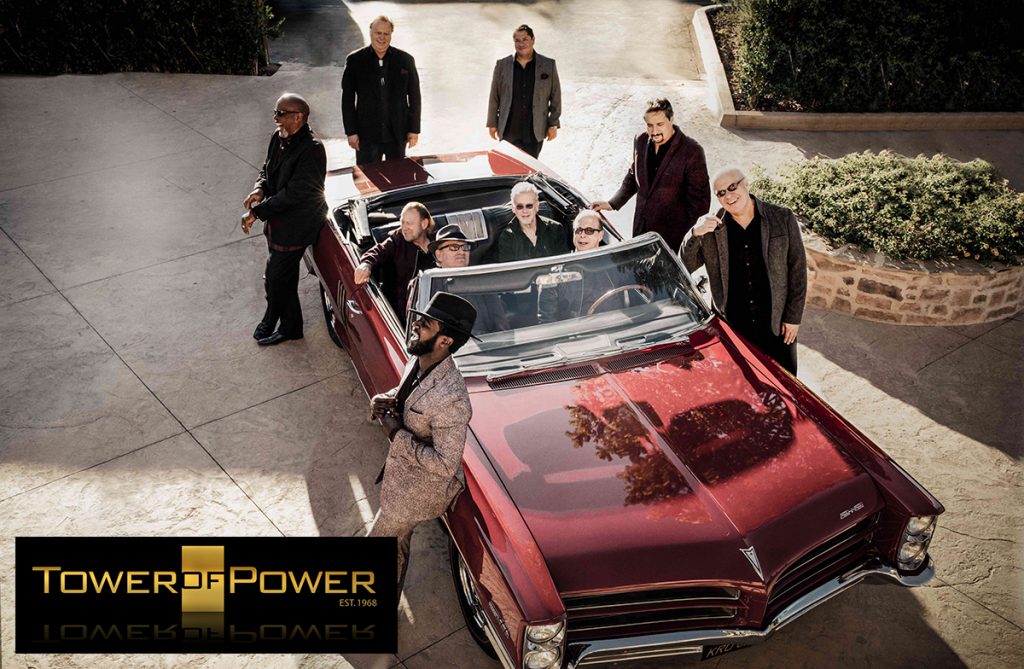 For close to 50 years, Tower of Power has delivered the best in Rhythm and Blues music. But, as group co-founder Emilio Castillo says, they could have had a much different name.

“We were a Soul band called The Motowns.” He recalls. “Rocco Prestia was the bass player, I was in there, and my brother was the drummer. I met Doc Kupka at the Alameda County Fair over the Fourth of July weekend back in 1968, and gave him an audition. He came into the band, and we eventually changed our name to the Tower of Power.” The reason for the band name change was that they had a specific goal in mind.

“We wanted to get into the Fillmore Auditorium and with a name like the Motowns, dressed in suits with razor cuts, we knew we’d never get in there. We grew our hair long, and started to be hippies, and changed our name. Doc then suggested to me that we should start writing our own songs. Our first song was ‘You’re Still A Young Man.”

The gig at the Fillmore was a major goal for the band, which incidentally came along at just the right time. “At the time, we had been playing nightclubs, and we had gotten busted for being underage. We had been playing underage in nightclubs for years. That’s all we knew. One night, the ABC came in, and caught the trumpet player drinking a screwdriver, and the next thing we knew, they put a notice out to all the clubs in the Bay Area that if they hired us again, they would lose their liquor license. We found ourselves with no work and no money. My parents had moved to Detroit and I was on my own for the first time. I was broke and hungry, and all I did was rehearse. We wrote the songs for the East Bay Grease record, and we practiced them every day. By the time November came around, we were at the end of our rope. I told the guys that I was going to Detroit for the holidays to see my parents, and if nothing happened with this audition, I wasn’t coming back.”

Fortunately, he did have to make a return trip to the Bay Area. “A couple of days later, Doc called me, and said ‘You’ve gotta come back. He dug it.” I said ‘Who dug it?” He said ‘Bill Graham.’ As it turned out, Bill and David Rubinson – the producer for his new label, San Francisco Records – liked the band because we were soulful. Everyone had grown out of the whole psychedelic thing. Bands like Jefferson Airplane and Grateful Dead had been happening for about three years. The collective ear of the Bay Area was ready for something soulful. That’s right when we came along.”

Their first record, East Bay Grease, helped to define the East Bay sound, and did well enough to warrant a recording contract with Warner Brothers. Bump City, their 1972 debut for the label, was a hit on both the Billboard 200 and the chart’s R&B Albums chart, and netted them the hits “You’re Still A Young Man” and “Down To The Nightclub.” The decade of the 1970s were a boom period for the group, who hit with radio classics like “So Very Hard To Go” and “What Is Hip?” and the band has continued to tour and record over the years with their latest project Hipper Than Hip being a live flash back to their 1974 tour. Castillo says their love of the stage is the same today as it was back in 1968.

“I still love it as much as ever. We’re not a smooth jazz band, or a retro band…we don’t follow trends, we just make our music exactly the way we want it to be. We noticed years ago that when we did that, the fans liked it. We stay true to that, and that makes it easy to go to work on a daily basis. Every time we go to play, we’re playing music we love because we got to make it our way” The thrill of stepping on stage has never gone away, because as Castillo says, he loves the attention. “Let’s face it. Musicians are some of the most self-centered people in the world. So, that never gets old. People ask what it feels like to hear your song on the radio. It never gets old. What’s it like to see yourself on TV? Again, it never gets old.”

In 2017, Tower of Power will be on the road – a lot – as usual. TOP consistently plays over 200 nights a year, touring the world. Bringing their music to Europe and Japan each year, criss-crossing the US with an occasional trip to Australia and New Zealand, taking the TOP message is their life’s work. Fans that come out to see Tower of Power this year will get a look at their brand new lead singer, Marcus Scott. Castillo says he’s a perfect fit. “It’s phenomenal. Most bands lose their singer, and it’s over. But, we’ve changed singers and other players so many times, the fans actually get excited about who’s next.” he said, as the band has had over forty members throughout their history. “I worked on finding a new singer and prayed about it a lot. I found out about Marcus, and he’s amazing. All the guys come on stage, and we just think ‘Wow. God has really blessed us.’ He’s doing a great job, and has a great personality. One of the things you learn when you’ve been in the business as long as I have is to hire good people with principles because you’re going to spend as much as twenty hours a day with these guys. Marcus has everything – he looks great, he sings great, he’s a good person. We’re just really blessed to have him.”

With a new member comes a new attitude, and Emilio says it’s contagious. “Everybody in the band is saying ‘Wow, what is happening?’ You get to an age where we’re at and things can start to run down but it seems like for us that things are really kicking into high gear.”

And, that’s the way Tower of Power likes it!

When asked to describe the band’s music, the group members give a variety of responses. Says Emilio, “What Tower plays is Oakland soul music.” Former Tower saxophonist Lenny Pickett, current musical director for the Saturday Night Live band, says “TOP is the world’s best rhythm and blues band.” In reality, TOP’s horn-driven, in- your-face sound is all its own.