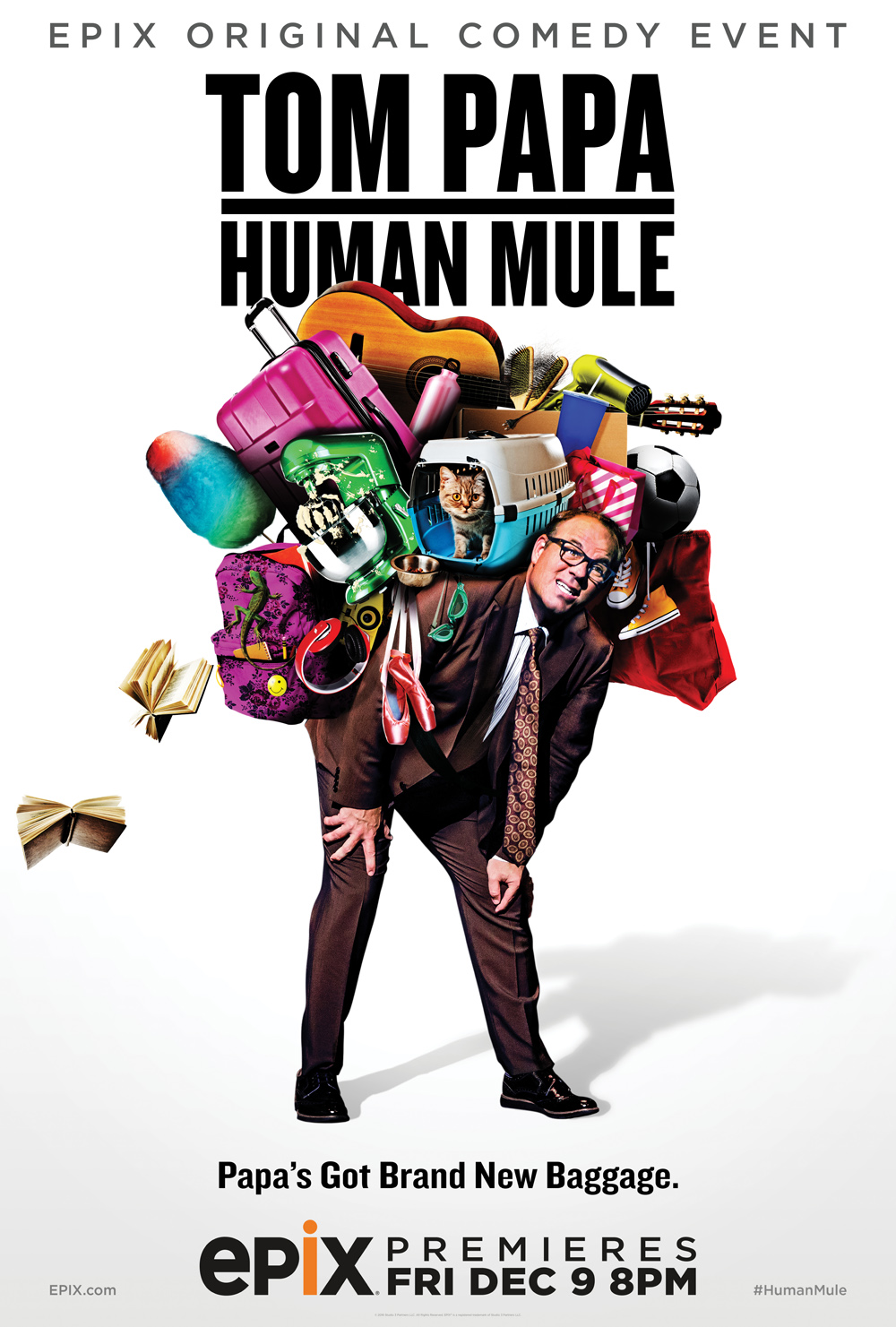 Tom’s new special, Human Mule, is out now on Epix!

With more than 20 years as a stand-up comedian, Tom Papa is one of the top comedic voices in the country, finding success in film, television and radio as well as on the live stage.

Tom Papa: Human Mule is a one hour comedy special that was filmed at the Hanna Theater at the Playhouse Square in Cleveland, Ohio on July 9th, 2016. Papa returned to one of his favorite cities to showcase a hilarious fresh take on some of his favorite themes including family life, the difficulties of being a person, and the challenges of life in our country today.

“I’m really excited to do another special with EPIX,” said Tom Papa. “They’ve been a great partner and like me so much that they’re even willing to shoot this one in Cleveland.” “Tom Papa’s humor lends insight on thoughts we’ve all had, but may not have dared to express,” said Mark S. Greenberg, President & CEO of EPIX. “I am excited to hear about Papa’s latest antics and the hilarity that ensues in what will mark his second special with the network.

Several times a year in New York and Los Angeles, Tom hosts a live Come To Papa scripted radio play that is recorded live for the podcast and SiriusXM show. With residencies at Largo in Los Angeles and The Village Underground in NYC, Tom writes the script for each live radio show and casts top actors and comedians to play the roles or perform stand-up, all backed by a live band. Performers include Matt Damon, Sarah Silverman, Joel McHale, Bill Burr, Jim Gaffigan, John Mulaney, Kevin Nealon, Kevin Pollack and many more.

In 2015, Tom guest starred on The Jim Gaffigan Show on TV Land and on Colin Quinn’s web series, Cop Show. In 2014 he was seen alongside Clive Owen in two episodes of Steven Soderbergh’s Cinemax series, The Knick, and he was seen in Chris Rock’s film, Top Five.

In 2013, Tom was seen alongside Michael Douglas and Matt Damon in the HBO film, Behind the Candelabra, which was directed by Steven Soderbergh and won 11 Emmys. Tom was also seen in the hit Comedy Central series, Inside Amy Schumer.

Tom starred opposite Matt Damon in the Steven Soderbergh film, The Informant, and starred opposite Paul Giamatti in Rob Zombie’s animated feature, The Haunted World of El Superbeasto, as the voice of El Superbeasto. Tom has appeared in the films Analyze That, opposite Robert DeNiro, and Comedian; he had a voiceover role in the DreamWorks animated feature “Bee Movie” and also was a writer on the project.

Personally chosen by Jerry Seinfeld, Tom hosted the NBC series, The Marriage Ref, which ran for two seasons. Tom had a recurring role opposite Julia Louis-Dreyfus on the CBS series, The New Adventures of Old Christine, and starred in his own NBC series, Come to Papa.

When not touring the country, Tom lives in New York and Los Angeles with his wife and family.