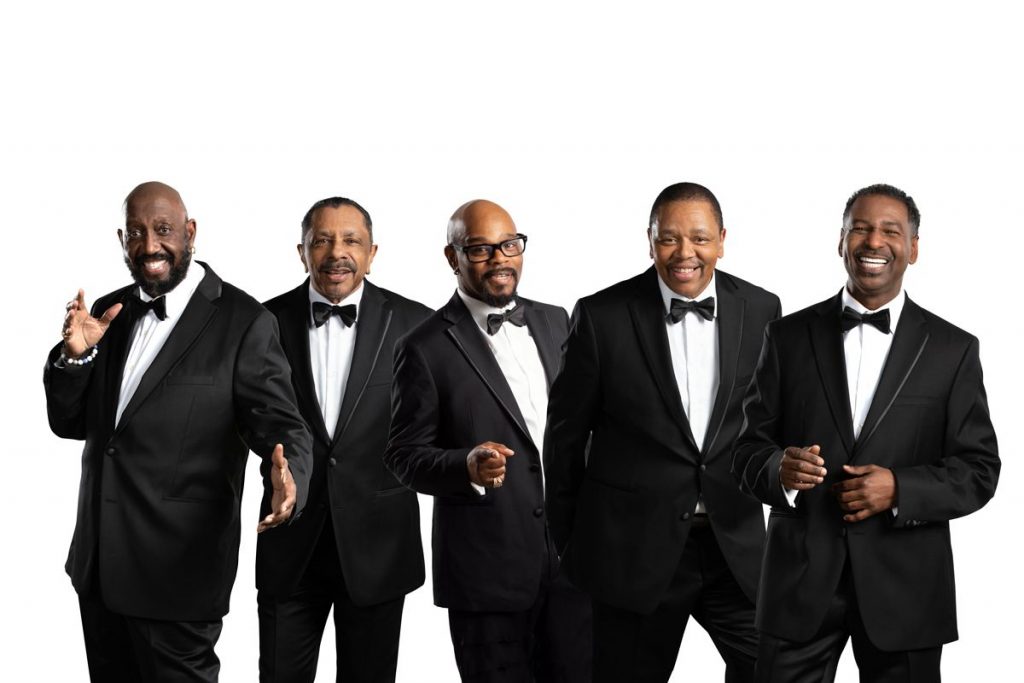 The Temptations, often referred to as American Music Royalty, are world-renowned superstars of entertainment, revered for their phenomenal catalog of music and prolific career. The group will be celebrating their 60th Anniversary beginning in June 2021 through June 2022. To mark this milestone, the Temptations are releasing a brand-new album with new, original songs, plus they are planning to tour both in the U.S, dates to be determined, and in the UK, fall of 2021. Dr. Otis Williams, the sole surviving member of the original, classic lineup of the Temptations, will turn 80 years old on October 30th of 2021.

The Temptations’ heritage, influence and contributions to, not only American culture and African American communities but also to the global music landscape are monumental. The influence that the Temptations had on mainstream and global artists, such as The Beatles, The Rolling Stones, Bob Dylan and others, is undeniable.

The group’s popularity is ever-increasing and they are one of the most iconic, bestselling brands in the entertainment world today. While the group has evolved over the years, Dr. Otis Williams has continued to lead the group and carry the torch forward for the next generation of Temptations’ fans.

The Temptations are currently the subject of the smash hit Broadway musical, Ain’t Too Proud: The Life and Times of The Temptations, which opened on Broadway at the Imperial Theatre on March 21st, 2019. The musical received 12 Tony nominations and won the Tony Award for Best Choreography at the 73rd Tony Awards at Radio City Music Hall in New York City on June 10, 2019. It has already captivated thousands of theater-goers during sold-out performances on Broadway. At year-end of 2019, Ain’t Too Proud had broken the house record at the Imperial Theatre for a second time. The week ending December 29th the musical had the highest grossing week in the history of the Imperial Theatre. In June of 2019, the show’s producers announced plans for a touring production of the musical to appear in more than 50 cities, in 100+ weeks, dates for 2021 and beyond to be announced.

Also in 2019, the original cast album for the smash hit Broadway musical, Ain’t Too Proud: The Life and Times of the Temptations was nominated for a Grammy® Award in the “Best Musical Theater Album” category.

In addition to the musical, the Temptations’ journey, as seen through the lens of Dr. Otis Williams, the sole surviving, original Temptation, was also a blockbuster television mini-series which aired in 1998. The mini-series, Temptations, was produced by long-time Temptations’ manager Shelly Berger, Dr. Otis Williams, and Suzanne de Passe, head of de Passe Entertainment, and was reportedly viewed by 45 million fans when it originally aired. The television mini-series went on to win an Emmy for Outstanding Direction for a Mini-series or Movie, as well as the 1999 NAACP Image Award for Outstanding Television Movie or Mini-series. The mini-series continues to air on cable networks today.

In 2018, Universal Music Enterprises (“UMe”) released worldwide the Temptations’ latest studio album, All the Time, which was the group’s first new album in eight years. It was released in CD, vinyl LP, limited edition white vinyl LP and digital formats. It features three new, original Temptations’ songs, in addition to inspired renditions of songs from Maxwell, The Weeknd, Sam Smith, Bruno Mars and others.

At the time of the album’s release, Dr. Otis Williams, founding member of the Temptations said, “…Looking back, I never could have imagined where my life has taken me. I’m proud of what the Temptations have achieved, and I’m grateful for every opportunity we’ve been so fortunate to receive. The music carries me. Together, we lift our voices with love and wonder…”

The group’s 60-year history spans the 20th and 21st centuries, and their music transcends generations. The Temptations’ story is a road map through American history. What began in Detroit, when a remarkable combination of soulful voices united, was the genesis of an epic journey that introduced multiple superstars to the world and produced some of the greatest music of our era.

Motown auditioned and signed the original Temptations in May of 1961. When the legendary “Classic Five,” (Otis Williams, Melvin Franklin, Eddie Kendricks, Paul Williams and David Ruffin) released the single, “The Way You Do the Things You Do,” in 1964, which peaked at #11 on the Billboard Hot 100 Chart and remained on the list for 11 weeks, it marked the beginning of a multitude of award-winning and chart-topping singles and albums that would be embraced by popular music audiences globally. Considered trailblazers in the 60’s, leading the way not only for themselves but for other R&B artists, and successfully reaching mainstream audiences here and abroad, the Temptations’ rise to fame was meteoric. It was on March 6, 1965 that their first million copy, bestselling single, “My Girl” hit #1 on Billboard’s Hot 100 chart. The Temptations’ role as artists, and how they used their voices to speak to the times they lived through, especially during the 60’s-one of the most turbulent decades in our nation’s history, is compelling.

They were among the first African American musical artists to crossover into mainstream America and appear on popular, national mainstream television programs, such as The Ed Sullivan Show, and The Hollywood Palace. The group’s star power was so striking that these top-rated, national programs, and many others, scheduled appearances for the Temptations multiple times during a single year. At the time, this was an unparalleled accomplishment for African American entertainers.

The Temptations, throughout the group’s evolution, have produced 53 Billboard Hot 100 singles, including four Billboard Hot 100 #1 singles: “My Girl,” “I Can’t Get Next to You,” “Just My Imagination,” and “Papa Was a Rollin’ Stone.” Additionally, they released 44 Top 10 R&B chart hits, 14 of which were #1 R&B singles, including timeless classics such as “Ain’t Too Proud to Beg,” “Beauty Is Only Skin Deep,” “I Wish It Would Rain,” and songs influenced by their funk/psychedelic soul sound including “Happy People,” and “Shakey Ground.” The group also has 16 #1 R&B Chart albums. The Temptations’ music, then and now, continues to raise the spirit of the country and uplift a nation searching for common bonds and glimmers of hope and humanity.

In 1974, the Temptations were the very first group to be awarded Favorite Soul/Rhythm & Blues Band/Duo/ Group at the inaugural American Music Awards Ceremony. In 1975, the Temptations recorded their album, A Song for You, that won the American Music Award for Best Soul/Rhythm & Blues Album, at the third annual American Music Awards ceremony in 1976. The album includes two wildly popular and bestselling #1 R&B singles, “Happy People,” (co-written by Lionel Richie) featuring the Commodores as instrumentalists, and “Shakey Ground” featuring instrumentals by Parliament-Funkadelic’s Eddie Hazel with Billy “Bass” Nelson. In August 1998, the Temptations released the album, Phoenix Rising, featuring the debut of Terry Weeks, a lead vocalist for the group then, and now, and it won the Soul Train Music Award for Best Rhythm & Blues/Soul Album by a Duo or Group at the 12th annual Soul Train Music Awards in 1999. The single, “Stay,” from that album became a “Top 30” R&B single.

In 1983, Ron Tyson, one of the group’s current lead vocalists, joined the Temptations. In May of 1983, the televised anniversary special Motown 25: Yesterday, Today, Forever, aired on NBC-TV and the extraordinary battle between the Temptations and the Four Tops led to a road tour together, famously called the “T’NT” tour. The two legendary groups still perform together today while on their respective concert tours.

In 1988, Dr. Otis Williams’ critically-acclaimed autobiography, Temptations, written with The New York Times bestselling author Patricia Romanowski, was published nationally. The book went on to become the source for both the Emmy Award-Winning television mini-series, Temptations, in 1998 and in 2019 the smash hit Broadway musical, Ain’t Too Proud: The Life and Times of the Temptations, with Tony Award-Winning choreography and Grammy®-Winning music.

On September 14, 1994, the Temptations were given a star on the Hollywood Walk of Fame in Los Angeles, California, and on June 7, 2019 given a star on the Apollo Theater’s Walk of Fame in Harlem in New York City. At the official ceremony, Dr. Otis Williams received a plaque marking the occasion on behalf of the legendary, classic five lineup. Dr. Otis Williams was also honored at the Apollo Theater’s 85th Anniversary Gala on June 10th, 2019.

In 2003, in 2012, and again, in September 2020, Rolling Stone magazine included the group’s Anthology album, originally released in 1973, among its list of the 500 Greatest Albums of All Time. In 2020, the editors of Rolling Stone magazine commented that the Temptations are “Indisputably the greatest black vocal group of the Modern Era…”

In 2006, Dr. Otis Williams received an honorary degree of Doctor of Humane Letters from Stillman College, a Historically Black College/University in Tuscaloosa, Alabama.

In 2018, the Library of Congress announced the induction of the Temptations’ classic mega-hit, “My Girl” into the National Recording Registry.

In November of 2019, the Temptations appeared on Billboard’s 125th Anniversary list of the 125 Greatest of All Time Artists.

In addition, for the 2019 holiday season, Universal Music Enterprises, the Temptations’ current recording company, released a first-of-its-kind, animated video featuring the Temptations’ “Silent Night,” one of the most popular holiday songs of all time.

In June of 2020, the Temptations released, what many called a message for our times, a new, soulful version of the popular single “You’ve Got a Friend,” as a YouTube video. The group raised their voices to reflect on their 60’s struggles and pay tribute to today’s movement for change. The video was recorded in a private session in Los Angeles, California.

In July of 2020, the Temptations were among the award-winning stars to perform in the 40th anniversary presentation of A Capitol Fourth, the national July 4th TV tradition on PBS.

On October 30, 2020, Dr. Otis Williams, the legendary and sole-surviving member of the original, classic five line-up of the Temptations and leader of group for 60 years, turned 79 years of age.

In November and December of 2020, the cast of the Broadway musical, Ain’t Too Proud: The Life and Times of the Temptations, performed in three nationally televised NBC-TV holiday events, including: the Macy’s Thanksgiving Day Parade, Christmas in Rockefeller Center, and One Night Only: The Best of Broadway to benefit Broadway Cares/Equity Fights AIDS.

Beginning in June 2021 through June 2022 the 60th anniversary of the Temptations’ legendary history and music will be commemorated. The Temptations will release a new album with brand new, original songs, and they are also looking forward to a national concert tour (dates to be determined) and a fall 2021 UK concert tour.

During Christmas 2021, the Broadway musical, Ain’t Too Proud: The Life and Times of the Temptations is scheduled to go back to the Kennedy Center in Washington, D.C., where it ran in previews.

Dr. Otis Williams, the sole surviving member of the original, classic line-up of the Temptations, Ron Tyson, a lead vocalist with the group for 38 years, Terry Weeks, a lead vocalist for 24 years, Willie Greene, Jr., bass vocalist with the group for five years, and Mario Corbino, who joined the group in 2020, always look forward to serenading fans with their soulful voices, lighting up stages with their famous Temptations’ Walk, and bringing joy to audiences of all ages.