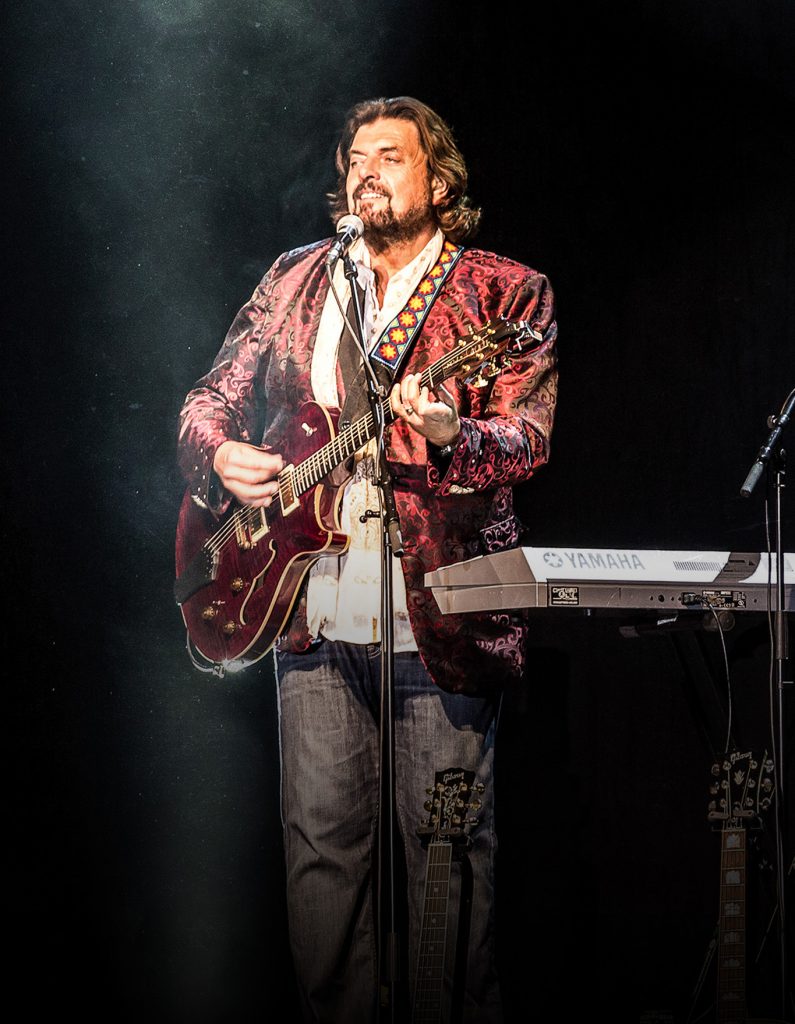 Grammy Award winner Alan Parsons was born into a family with an impressive history in entertainment. His great-grandfather was the celebrated actor/manager Sir Herbert Beerbohm Tree. His mother was an actress, professional folk singer and harpist and his father, Denys Parsons, an accomplished pianist and flautist as well as the author of many books. The late Oliver Reed, film actor was a cousin. His uncle, David Tree was also a film and stage actor.

Alan had dabbled with live performance in his late teens as a folk/blues acoustic player and as a lead guitarist with a blues band called The Earth in the late sixties in his hometown of London. (Their only album, Elemental surfaced recently and was released by Record Collector Magazine in 2015.) But as soon as he landed a job at the famous Abbey Road Studios at the age of 19, it became clear that the world of sound recording was to dominate his career.Abbey Road:
He was fortunate enough to work as assistant engineer on the last two albums by The Beatles and after he qualified as a fully-fledged recording engineer, he went on to work with Paul McCartney and The Hollies among many others. But it was his contribution as engineer on Pink Floyd’s classic The Dark Side Of The Moon that really got him world attention. That soon led to striking successes as a producer – notably with Pilot’s Magic, John Miles’ Highfly and Music and Steve Harley’s (Come Up And See Me) Make Me Smile. He also produced the hugely successful Year Of The Cat album with Al Stewart and two albums with American prog rock band Ambrosia.In 1975 he met Eric Woolfson who not only became his manager, but joined forces with Alan as a songwriting and performing partner for what became known as The Alan Parsons Project. The APP’s debut album, Tales Of Mystery And Imagination based on the works of Edgar Allan Poe paved the way for a signing to Clive Davis’ newly launched Arista label and a string of hit albums, namely I Robot (1977), Pyramid (1978), The Turn of a Friendly Card (1980), Eye in the Sky (1982), Ammonia Avenue (1984), Vulture Culture (1985), Stereotomy (1986) and Gaudi (1987). A brief venture into musical theatre resulted in Freudiana in 1990.The show ran for over a year in the historic Theater An Der Wien in Vienna. Eric and Alan then went separate ways. Eric devoted his career to the musical theatre while Parsons felt the need to bring his music to the live concert stage and to continue to record ambitious symphonic rock music.With his long-standing previous APP collaborators, guitarist Ian Bairnson, drummer Stuart Elliott and orchestral arranger Andrew Powell, Alan dropped the “Project” identity for Alan Parsons’ –Try Anything Once – in 1994. The partnership continued for On Air in 1996 and The Time Machine in 1999. During this time the first incarnation of “Alan Parsons Live Project” toured to sell out audiences throughout the globe. Following Alan’s relocation to California in 1999 with his American girlfriend, Lisa, and a divorce from Smokey, his first wife, a brand-new Live Project band was formed in 2003. That same year Lisa and Alan were married.Another band reshuffle happened in 2010, and various other personnel changes and additions have taken place since then. The 2019 band consists of Alan on acoustic guitar, keyboards and vocals, P.J. Olsson on lead vocals, Todd Cooper on sax, percussion, and lead vocals Tom Brooks on keyboards and vocals, Guy Erez on bass and vocals, Jeff Kollman on lead guitar and vocals, Danny Thompson on Drums and vocals, and Dan Tracey on guitar and vocals.

In 2010, Alan felt the need to share his extensive knowledge and expertise with the masses. With the help of fellow Brit Julian Colbeck, Alan wrote and produced a comprehensive instructional video series about recording called The Art & Science Of Sound Recording (ASSR). It features contributions from a myriad of celebrity artists, engineers and producers and is narrated by Billy Bob Thornton. There is also a companion book. See www.artandscienceofsound.com.

Alan has been supporting ASSR with a series of lectures and Master Class Training Sessions (MCTS) all over the world. It has been a great opportunity for the attendees to witness Alan at work in the studio and to participate actively in the making of a possible future hit.

Since the beginning of 2012, as well as performing live shows, Alan has kept busy in the studio doing vocals for German electronica outfit, Lichtmond, and with YES stars Billy Sherwood and the late Chris Squire as The Prog Collective. Other collaborations have been with Mexican superstar Aleks Syntek, celebrated Israeli singer/songwriter Aviv Geffen, and with Austrian chart-topping singer Virginia Ernst. Alan also produced an album titled Grand Ukulele with Jake Shimabukoro, the virtuoso ukulele player, whose YouTube video of “While My Guitar Gently Weeps” has received over 16 million hits. The album contains a number of orchestral arrangements by Winger frontman, Kip Winger.

A collaboration with Steven Wilson as engineer and associate producer resulted in major success including a Top 5 album in Germany with The Raven That Refused To Sing in 2013.

In the summer of 2016 Alan released a video on Blu-ray and DVD, with audio in both stereo and 5.1 Surround of a major concert event in Medellin Columbia, featuring a 70-piece symphony orchestra.

Both Tales of Mystery and Imagination and Eye in the Sky have been released in anniversary box sets, including half speed vinyl at 45rpm, original and bonus CDs, and include 5.1 Surround mixes on Blu-ray. The Eye  In The Sky Surround mix earned him his first Grammy Award after a win had eluded him after twelve previous Grammy nominations. Other awards include The Les Paul Award in 1995 and The Diva Hall Of Fame Lifetime Achievement Award in Munich, Germany in June 2012. He is in demand as a public speaker and was keynote speaker at the 2014 Audio Engineering Society Convention in Los Angeles and was the opening speaker at the TEDx Conejo conference in California in April 2012.

In March of 2018 Alan lead an intensive Master Class weekend workshop along with Grammy Award winning arranger (and one of Alan’s band members) Tom Brooks, at Hybrid Studios in Santa Ana, California, which included a full symphony orchestra. Participating in the initiative were session greats Vinnie Colaiuta, Nathan East and Jeff Kollman. The session featured a rock version of the orchestral classic, The Sorcerer’s Apprentice, and appears on Alan’s 2019 album, The Secret.

Alan recently built a state-of-the-art studio with a Neve 5088 console at his property in California. The 2019 Ammonia Avenue Hi-Def and 5.1 Surround remixes were compiled and mastered there, as well his latest Studio Album, The Secret. The album features guest appearances from Jason Mraz, Lou Gramm of Foreigner, and Steve Hackett.

Exercising his family genes in acting, (as cousin to noted actor the late Oliver Reed), Alan was immortalized as a cartoon-ized version of himself in the “Yacht Rocky” episode of the 2019 series of the long-running, mega-hit animated TV series, “Family Guy.”

Alan’s longtime hobby has been performing magic, and he regularly attends the legendary Magic Castle in Hollywood where he is a magician member. Magic was a key subject for the concept of The Secret album.

Alan lives on an organic avocado ranch in Santa Barbara, California with his wife Lisa and numerous farm animals and pets.