Richard Thompson And The Blind Boys of Alabama 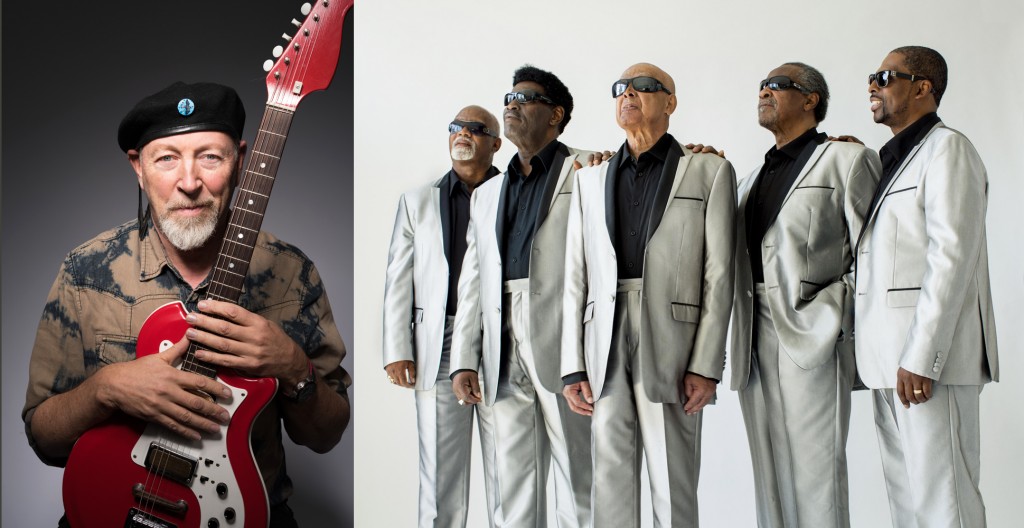 “The finest rock songwriter after Dylan and the best electric guitarist since Hendrix.” – Los Angeles Times

Named by Rolling Stone Magazine as one of the Top 20 Guitarists of All Time, Richard Thompson is also one of the world’s most critically acclaimed and prolific songwriters. He has received Lifetime Achievement Awards for Songwriting on both sides of the Atlantic – from the Americana Music Association in Nashville to Britain’s BBC Awards as well as the prestigious Ivor Novello. In 2011, Thompson received an OBE (Order of the British Empire) personally bestowed upon him by Queen Elizabeth II at Buckingham Palace. In the USA Thompson has been nominated at the Americanas for both “Artist of the Year” and “Song of the Year”. His recently released CD, Still was produced by Wilco’s Jeff Tweedy which reached #6 in the UK charts (just ahead of Taylor Swift)!

Having co-founded the groundbreaking group Fairport Convention as a teenager in the 60’s, Richard Thompson and his mates virtually invented British Folk Rock. By the age of 21 he left Fairport to pursue his own career, followed by a decade long musical partnership with his then-wife Linda, to over 30 years as a highly successful solo artist who tours both solo acoustic and with his electric trio.

Thompson’s genre defying mastery of both acoustic and electric guitar along with dizzying energy and onstage wit continue to earn Richard Thompson massive new fans and a place as one of the most distinctive virtuosos in Folk Rock history.

The Blind Boys of Alabama

The Blind Boys of Alabama have the rare distinction of being recognized around the world as both living legends and modern-day innovators. They are not just gospel singers borrowing from old traditions; the group helped to define those traditions in 20th century and almost single-handedly created a new gospel sound for the 21st. Since the original members first sang together as kids at the Alabama Institute for the Negro Blind in the late 1930s (including Jimmy Carter, who leads the group today), the band has perserved through seven decades to become one of the most recognized and decorated roots music groups in the world.

Touring throughout the South during the Jim Crow era of the 1940s and 1950s, the Blind Boys flourished thanks to their unique sound, which blended the close harmonies of early jubilee gospel with the more fervent improvisations of hard gospel. In the early 1960s, the band sang at benefits for Dr. Martin Luther King, Jr., and were a part of the soundtrack to the Civil Rights movement. It’s almost unbelievable that a group of blind, African-American singers, who started out touring during a time of of whites-only bathrooms, restaurants and hotels, went on to win five Grammy Awards, a Lifetime Achievement Grammy, be inducted into the Gospel Music Hall of Fame, and to perform at the White House for three different presidents.

Few would have expected them to still be going strong—stronger than ever, even—so many years after they first joined voices, but they’ve proved as productive and as musically ambitious in recent years as they did in the beginning. In 2001, they released Spirit of the Century on Peter Gabriel’s Real World label, mixing traditional church tunes with songs by Tom Waits and the Rolling Stones, and won the first of their Grammy Awards. Subsequent Grammy-winning albums have found them working with the likes of Ben Harper, Aaron Neville, Mavis Staples, The Preservation Hall Jazz Band, and Willie Nelson. In 2013 the band worked with Justin Vernon (of Bon Iver) to release I’ll Find A Way, a powerful collection of gospel and spiritual songs new and old, featuring some of the Blind Boys’ most fervent vocals as well as contributions by a new generation of Blind Boys fans, including Merrill Garbus of tUnE-yArDs, Patty Griffin, and Justin Vernon himself.

The Blind Boys’ live shows are roof-raising musical events that appeal to audiences of all cultures, as evidenced by an international itinerary that has taken them to virtually every continent. The Blind Boys of Alabama have attained the highest levels of achievement in a career that spans over 75 years and shows no signs of diminishing. “We appreciate the accolades and we thank God for them,” says Jimmy Carter, a founding member and the Blind Boys’ current leader. “But we’re not interested in money or anything other than singing gospel. We had no idea when we started that we would make it this far. The secret to our longevity is, we love what we do. And when you love what you do, that keeps you motivated. That keeps you alive.”