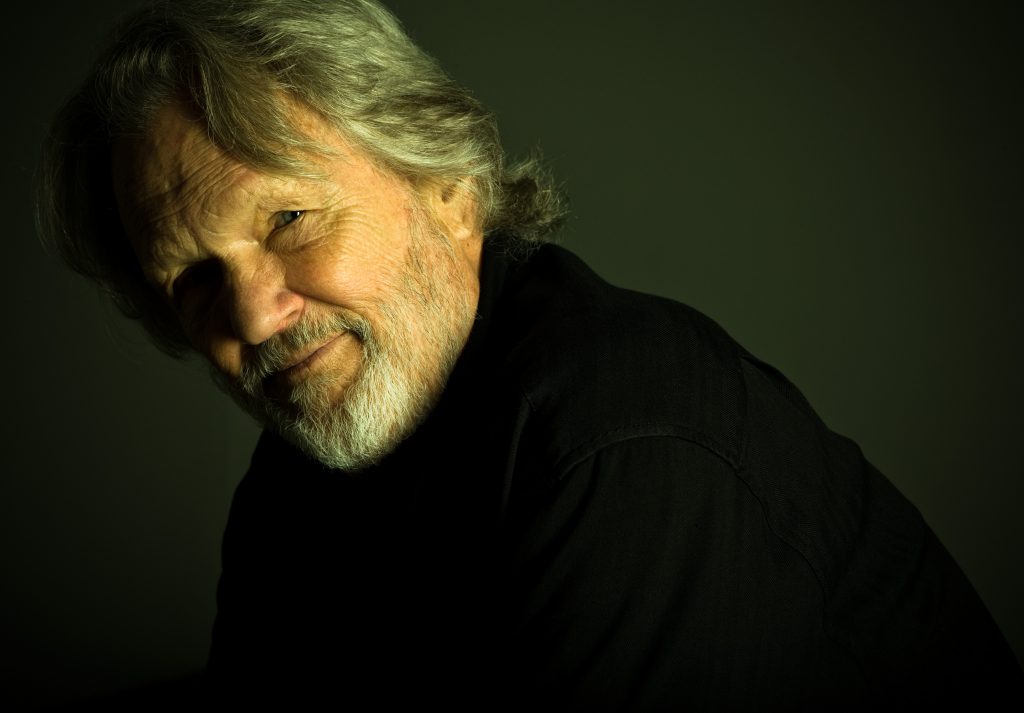 Kris Kristofferson has been making things happen his entire life. Born in Texas and
raised in a military family, he was a Golden Gloves boxer who studied creative writing at
Pomona College in California. The Phi Beta Kappa graduate earned a Rhodes scholarship
to study literature at Oxford, where he boxed, played rugby and continued to write songs.
After graduating from Oxford, Kristofferson served in the army as an Airborne Ranger
helicopter pilot and achieved the rank of Captain. In 1965, Kristofferson turned down an
assignment to teach at West Point and, inspired by songwriters like Willie Nelson and
Johnny Cash, moved to Nashville to pursue his music.

“When I was in the army, I was one of the few people outside of his personal friends who
knew about Willie Nelson,” Kristofferson recalls. “I listened to a disc jockey who
happened to be a Willie fan. He would play Willie’s songs and talk about him all the
time. By the time I got to Nashville, he was a superhero to me. For guys like me, Johnny
Cash and Willie Nelson were two gods we worshipped. Then Willie and I got to be best
friends. I came from a position of idolizing him to finding out he’s the funniest son of a
bitch you could be around.”

After struggling in Music City for several years, Kristofferson achieved remarkable
success as a country songwriter at the start of the 1970s. His songs “Me and Bobby
McGee,” “Help Me Make It Through the Night,” “Sunday Morning Coming Down,” and
“For the Good Times,” all chart-topping hits, helped redefine country songwriting. By
1987, it was estimated that more than 450 artists had recorded Kristofferson’s
compositions.

His renown as a songwriter triggered Kristofferson’s successful career as a performer and
that, in turn, brought him to the attention of Hollywood, leading to his flourishing career
as a film actor. Kristofferson has acted in more than 70 films. In 1977 He won a Golden
Globe for Best Actor in “A Star Is Born.” He’s appeared in cult favorites including the
“Blade” trilogy, “Lone Star,” “A Soldier’s Daughter Never Cries,” “Alice Doesn’t Live
Here Anymore,” “Blume In Love,” “Cisco Pike,” and “Pat Garrett and Billy the Kid.”
Recent films include “Fast Food Nation,” “Dreamer: Inspired By A True Story,” “The
Jacket,” “Silver City,” “He’s Just Not That In To You,” and “Dolphin Tale.”

Heralded as an artist’s artist, the three-time GRAMMY winner has recorded 30 albums,
including three with pals Willie Nelson, Johnny Cash and Waylon Jennings as part of the
Highwaymen. Kristofferson has spent three decades performing concerts all over the
world, in most recent years in a solo acoustic setting, which puts the focus on the songs.
“There’s an honesty in the sparseness. It feels like direct communication to the listener,”
he says. “I still have more fun when I’m with the band, but being alone is freer,
somehow. It’s like being an old blues guy, just completely stripped away.”

Many would have hung their hat by now. Instead, Kristofferson barely has paused for
breath. He’s released several recent high watermarks including the increasingly intimate
A Moment of Forever (1995), The Austin Sessions (1999) and This Old Road (2006), and
he produced some of his finest work with the deeply personal Closer to the Bone (2009)
and Feeling Mortal (2013). Kristofferson has reached living legend status, but that hasn’t
changed or hindered his creativity. His current CD, The Cedar Creek Sessions, was
recorded live at Austin’s Cedar Creek Recording Studio in June 2014. Released for
Kristofferson’s 80th birthday in 2016, the double-CD set is a snapshot of the legendary
songwriter in the twilight of his life. The Cedar Creek Sessions was nominated for a
GRAMMY for Best Americana Album in 2016.

In addition to many other awards, Kristofferson is a member of the Country Music Hall
of Fame, winner of the prestigious Johnny Mercer Award from the Songwriter Hall of
Fame, and was honored with the American Veteran’s Association’s “Veteran of the Year
Award” in 2002. For Kristofferson’s 70th birthday in 2006, his friends and admirers gifted
him with a tribute CD, The Pilgrim: A Celebration of Kris Kristofferson. Stars including
Willie Nelson, Russell Crowe, Emmylou Harris, Gretchen Wilson, Rosanne Cash, and
Brian McKnight recorded 17 of Kristofferson’s compositions for the tribute. In 2007,