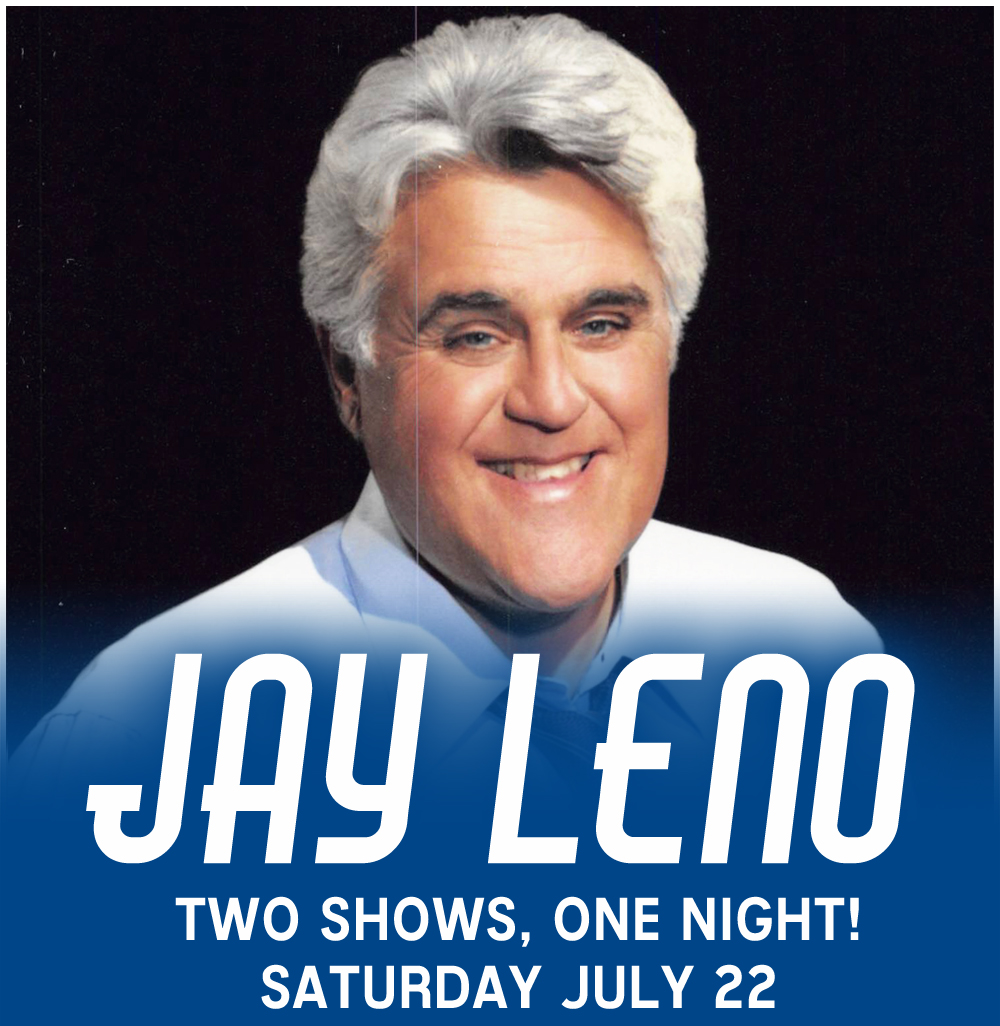 Jay Leno will be performing two times in one night: the first show is at 7pm, and the second is at 10pm.

Jay Leno’s late night television ratings domination included more than two decades of “The Tonight Show with Jay Leno,” winning every consecutive quarter of his hosting over the past 19 years.. After resuming hosting the 11:35 PM program following its one-time interruption, he made it once again the consistent and uninterrupted ratings leader for late night, once again leading all of the ensuing quarters handily, under the supervision throughout of executive producer Debbie Vickers. the process, he has been honored by the Television Academy with an Emmy for “Outstanding Comedy, Variety or Music Series.” “The Tonight Show with Jay Leno” has also taken home the trophy for “Favorite Late Night Show” in the annual TV Guide Awards determined by voting viewers, and he was recently installed in the Television Academy’s Broadcast Hall of Fame.

As if night-time dominance were not enough, Leno has also succeeded in the newest entertainment arena. “Jay Leno’s Garage” of which he is a producer as well as star. The NBC creation, which is viewed at Jaylenosgarage.com, has gained an international following on the Web, not to mention an Emmy Award and two additional nominations for Outstanding Special Class–Short-Format Nonfiction Programs. Leno, himself, is the recipient of the People’s Choice Award and other honors, including the Harris Poll selection as most popular star on television. Other personal highlights include his induction into the Academy of Television Arts and Sciences’ Broadcasting Hall of Fame, his upcoming reception of the John F. Kennedy Center for the Performing Arts’ Mark Twain Prize for American Humor, the Hasty Pudding Award at Harvard University, an honor whose sole prior comedy/talk host recipient was Johnny Carson and an honorary doctorate from his alma mater, Emerson College. Like Mr. Carson, Groucho Marx and an elite group of entertainment figures, he has been invited to have his papers installed in the Library of Congress. He also received a star on Hollywood’s Walk of Fame (asking that it be placed in front of the Ripley’s Believe It Or Not Museum since is where he was arrested for vagrancy when he first arrived in Hollywood. He also has set several land speed records and became the first person to drive the pace car of all major NASCAR events.

Having passed the torch of Tonight Show succession to Jimmy Fallon, Jay Leno has increased his customary busy schedule of comedy performances in top venues around the United States and occasionally abroad, continues his web venture relating to his passion for automobiles and is in consideration of the many other applications of his time and talents which have been offered or which he is personally evolving.” He interrupted these pursuits to make his first trip to Israel for the honor of presenting the Genesis Award, Israel’s equivalent of the Nobel Award, to Michael Bloomberg.

It was in May of 1992 when Leno followed in the footsteps of legendary NBC late-night hosts Steve Allen, Jack Paar and Johnny Carson as “Tonight Show” host. Pitted against another television superstar David Letterman in the ll:35 PM hour, Leno became the ratings leader of late night within two years and never looked back, establishing firm leadership in all demographic categories, a winning streak exceeding 50 consecutive quarters.

Prior to becoming host, Leno had been the exclusive guest host on “The Tonight Show Starring Johnny Carson” since September 1987. He first appeared as a guest on the show March 2, 1977, and he made numerous additional appearances on the show, as well as NBC’s former program “Late Night with David Letterman.”

An indefatigable performer, Leno loves to test his humor live on audiences across the nation, performing over 100 live appearances in nightclubs, theaters and stadiums each year, including during his long Tonight Show hosting. He has been touted as one of the nicest people in show business and the hardest-working — a winning tandem for the man who says “Anyone can have a life – careers are hard to come by!”

His “everyman”-style and personality have helped him earn millions of fans worldwide, especially in the regions where people relate to his personable style and work ethic. In addition to traversing the U.S., he has entertained in various countries, including Bosnia, where he performed for military troops associated with the war in Afghanistan, and Aviano, Italy, where he performed for troops associated with the peacekeeping efforts in Bosnia. He remains passionate about performing in front of live audiences, including the military, and appears regularly in Las Vegas, on college campuses around the United States and in other venues.

Moreover, he is committed to using his amalgam of talents to help those less fortunate. Each year, he serves as Master of Ceremonies and does numerous benefit performances, including shows for those whose lives were devastated by the 9/11 tragedy, the tsunami in Thailand, hurricanes in the gulf, and the severe economic downturn in Detroit. He leads the annual Love Ride in California to benefit numerous humanitarian organizations serving people with autism, muscular dystrophy, and Special Olympics, among many others.