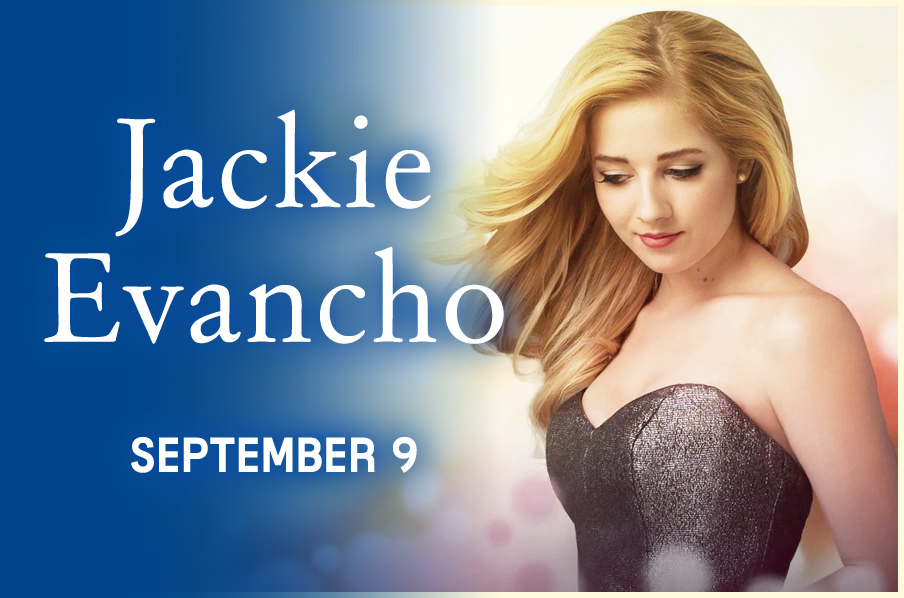 On sale Friday June 30 at noon!

A worldwide sensation when she was only ten years old, Jackie Evancho is moving past the exuberant promise of a child prodigy vocalist, toward maturity as a singer, as a creative artist and as a young woman. Since she first dazzled American television audiences at the age of 10 – gaining global recognition with her stunning debut on NBC’s America’s Got Talent – Jackie Evancho has released a string of platinum and gold albums, with sales of over 2.5 million in the US. Along the way, she has also made history – the youngest solo platinum artist … the youngest Top 5 debut artist ever in the U.K. … the youngest person to give solo concert at Lincoln Center … the highest-ranking debut artist of 2010. All six of Jackie’s albums have hit No. 1 on the Billboard Classical chart. The magnitude of her success led Billboard twice (in 2010 and 2012) to include Jackie on its list of “music movers-and-shakers under the age of 21.”
With the release of Two Hearts, the amazing journey of Jackie Evancho reaches an exciting new place, both creatively and personally. The album’s title says a lot about growth: Jackie’s heart is always in the classical crossover singing her fans love, but she is discovering another facet of her work, her range and, thus, her heart – a love of songwriting and a new, expressive pop sound.

Two Hearts features a wide variety of classic and popular songs including Lucio Dalla’s immortal “Caruso”; the beautiful “Attessa,” based on the Intermezzo from Cavalleria rusticana; Enya’s “May It Be” from The Lord of the Rings: The Fellowship of the Ring, and Taylor Swift’s “Safe and Sound,” all reimagined in Jackie’s unique style. Also included are her 2016 single “Apocalypse” and four songs she co-wrote – “The Haunting,” “Wonderland,” “Sane” and “Pedestal.”

Interviewed in Billboard in 2016 about the game-changing pop sound she revealed in the “Apocalypse” single, Jackie said, “I’m not going to get rid of my classical voice, because that’s my roots, that’s what I love the most. But I do want to test out the contemporary side of my voice, because I’ve just discovered that I had it and it’s really fun to experiment with … To me, there’s really no limits to what I can do right now, because I really just want to see what’s best for me. So I can’t just put myself in one spot.”

Jackie Evancho’s meteoric rise is already a show business legend. YouTube video stardom led to her spectacular, against-the-odds appearance on America’s Got Talent in 2010 that delivered the heat and the promise of a new star, in a luminous performance of the beloved Puccini aria “O mio babbino caro.” Her breakthrough was transformed quickly into the basis for a serious career. In less than a decade, Jackie has made seven chart-topping albums and DVDs, headlined three PBS television specials, appeared in the film The Company We Keep at the request of her co-star Robert Redford, and tirelessly toured the world, singing for Presidents Barack Obama and Donald Trump, other world leaders and her fans everywhere. In addition to her solo success, Jackie has recorded duets with such notable artists as Tony Bennett, Susan Boyle, Il Volo, Plácido Domingo, Barbra Streisand, Chris Botti, The Tenors and Joshua Bell.
The success of the “little blonde girl with the big voice” from Pittsburgh has defied the odds. Her first major-label recording, O Holy Night, made Jackie the top-selling debut artist of 2010, with the EP album entering the Billboard 200 chart at No. 2 – the youngest solo artist ever to debut in the Top 5. With sales of more than a quarter of a million copies in its first week, O Holy Night was certified a platinum record, and Jackie Evancho became youngest performer ever to go platinum in the U.S.
Dream with Me was Jackie’s first full-length album for Sony Music, produced by David Foster, who first encountered her before her breakthrough, when she was only nine. Debuting at No. 2 in the Billboard 200, the album confirmed the success of O Holy Night, featuring duets with Barbra Streisand and Susan Boyle and bringing Jackie a platinum record and international acclaim – the youngest album performer ever to debut in the Top 5 in the U.K. The success of Dream with Me established a benchmark for how her career would unfold, a multimedia blitz that took her to television’s best-rated programs, a PBS special and a distinctive tour of sold-out top concert venues around the world.

The formula has also driven the success of Jackie’s albums that followed – Heavenly Christmas, Songs from the Silver Screen and Awakening – all expanding her repertoire, her collaborations with artists and writers, and her worldwide audience.
Jackie’s sixth and most recent album – Someday at Christmas – continued her unbroken streak of No. 1 titles on the Billboard Classical Album chart, also reaching No. 93 on the Billboard Top 200. Someday at Christmas brought together her favorite holiday tracks, including a remarkable collaboration with Plácido Domingo, as well as three new tracks including the Stevie Wonder title song and a version of “The Little Drummer Boy” with the group Il Volo.
Throughout her emerging career, Jackie Evancho has sought to broaden her experience and embrace new challenges. In 2012, she decided to try her hand at both acting and modeling, and the following year performed as part of an unprecedented Cirque du Soleil extravaganza at the Bellagio’s “O” Theatre to support “One Night for One Drop” on World Water Day.

Jackie made her feature film debut in 2013 when Robert Redford cast her as his daughter The Company You Keep, a thriller that featured her in a cast that included Susan Sarandon, Shia LaBeouf, Anna Kendrick, Terrance Howard, Nick Nolte and Stanley Tucci. “I am so happy that Mr. Redford picked me to be in his film,” Jackie said at the time, adding, “and I am excited to learn from performers that are amazing at what they do.” The same year, GUESS owner Paul Marciano selected Jackie to star in the Fall 2012 GUESS Kids clothing campaigns.

“I have had so much fun and done so many challenging things,” Jackie said at the end of that year. “But while I really enjoyed all the traveling and the acting and had such a great time posing in all those great clothes for GUESS, singing is still the thing I love the most.”

In addition to her appearance at the Presidential inauguration, Jackie Evancho sang for Pope Francis I during his US visit and, a few years before, performed at the lighting of the National Christmas Tree in Washington, D.C., where she sang for – and delighted – President Barack Obama and his family. Two months later, she was again invited to perform for the President and Congressional leaders during the National Prayer Breakfast. She was also invited to perform on Oprah Winfrey’s farewell special.
In early 2012, Jackie was selected to represent the US in Russia at the opening of the St. Petersburg Economic Forum. She performed in front of 100,000 people prior to the Forum’s opening, singing with two international opera stars, Russia’s Dmitri Hvorostovsky of Russia and South Korea’s Sumi Jo. Jackie’s fan base also extends to Japan, where she was invited to perform for the Royal Family at the Imperial Palace, as well as sold-out performances with the Tokyo Philharmonic.

Jackie Evancho is in many ways a typical teenager: she lives in Pittsburgh with her family, where she recently got her drivers license. She is continuing her education in the midst of touring and recording. And her heart opens itself to more than music: Jackie is a proud supporter of her transgender sister Juliet and the struggle for transgender equality.

Never could there be a better time for a new album called Two Hearts – a celebration of the success Jackie Evancho has achieved, but an opportunity to reach higher and farther to transform a career that is already a dream come true.