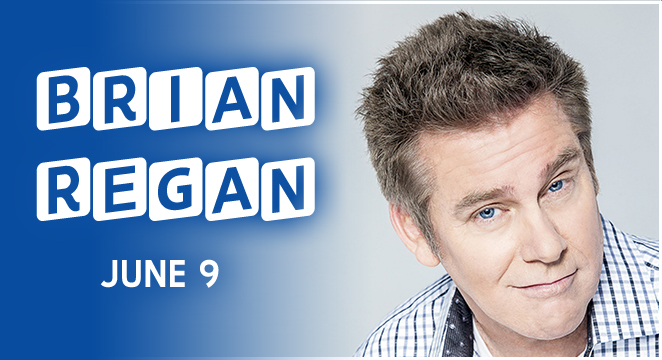 “He is one of my favorite, favorite stand-up comedians.” – Jerry Seinfeld

“No comedian in the world says, ‘Yeah, I want to follow Brian Regan.’ ” – Chris Rock

“Brian Regan is one of my favorite comedians ever. He is unbelievably funny.” – Jimmy Fallon

Setting a comedic standard of excellence that others continually try to follow, Brian Regan recently signed a two-special deal with Netflix, joining Dave Chappelle, Louis C.K., Chris Rock and Jerry Seinfeld as the only comedians in multi-special deals with the leader in worldwide streaming. Brian’s first Netflix special was taped June 23 and 24 at The Paramount Theater in Denver and will be released in November.

On November 11, Brian made his Carnegie Hall debut and on October 17, he co-starred alongside Ron Livingston in Peter Farrelly’s new TV series, Loudermilk, on The Audience Network. Brian’s last stand-up special, Brian Regan: Live From Radio City Music Hall (2015), was the first live broadcast of a stand-up special in Comedy Central’s history. The special was critically acclaimed with Vanity Fair calling Brian, “The funniest stand-up alive.” And on May 8, 2015, Brian made his 28th and final stand-up performance on Late Show With David Letterman, the most of any comic since the show moved to CBS in 1993.

A regular on The Tonight Show Starring Jimmy Fallon, Brian is the unique comedian whose material is relatable to generations of fans and revered by comedians as the best in the business.