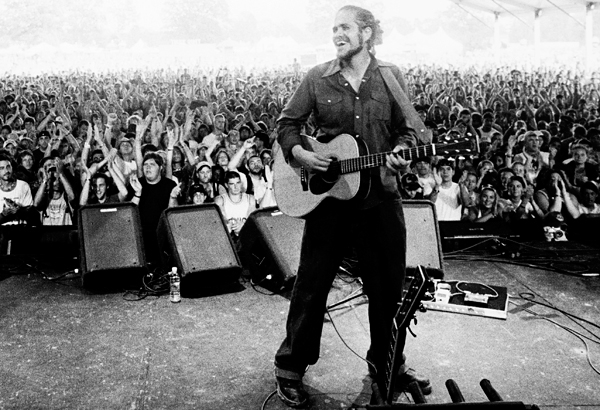 Note: This is An Intimate Solo / Acoustic Listening Performance by Citizen Cope

$1.00 of every CITIZEN COPE TICKET purchased will go to supporting the All Our Kids organization: http://www.aokdc.org/

“The city’s most soulful export since Marvin Gaye.” – The Washington Post

“Rawness improbably balanced by a mixture of danger and delicacy,” says one Rolling Stone writer, “is what gives Citizen Cope his edge. As a singer, songwriter and producer, he stands alone—an artist immune to corruption.”

Dug deep into the rich soil of American music, Cope’s roots are complex. You may think of Bill Withers or Neil Young or John Lee Hooker or Van Morrison or Willie Nelson or Al Green. Yet, listening to Cope, you also may think of none of the above. You may not think at all, but rather feel a man exposing stories that haunt his heart.

He was born Clarence Greenwood, a child of the seventies, and his life journey is as singular as his art. He is the radically mashed-up product of Greenville, Mississippi; Memphis, Tennessee; Vernon, Texas; Austin, Texas; Washington, DC; and Brooklyn, New York. These locations are felt everywhere in his stories. His sounds are southern rural, big sky lonely, concrete urban, and painfully romantic.

In the past nine years, he has produced four albums of depth and distinction, each a critical chapter in his search for a sound that paints an auditory American landscape in which despair wars with hope and hope, tied to love, is elusive.

Cope’s musical education was catch-as-catch can. Folk tales—whether through William Faulkner or Big Bill Broonzy—shaped his sensitivity. A few college courses at Texas Tech alternately bored and excited him. In the Austin of the eighties, he took sound classes and found himself fooling with a primitive four-track setup. Turntables intrigued him. He heard hip hop as inspired invention. For years, he got lost in his self-designed lab, cooking up beats and motifs that only later would be shaped into songs.

In the midst of the squalor, grandeur, and hypocrisy of the nation’s capitol, Cope set up camp. Vocalist Michel Ivey recruited him as a mad scientist who feverishly concocted samples for the artsy-edgy configuration known as Basehead. As the group hit the road, Cope stayed in the background, moving dials and pushing buttons. Inside his head, he heard stories that still had not assumed full form.

The long night of gestation got even longer. Finally, as the songs gave birth, Cope assumed others would sing them. He had sculpted certain stories and developed certain sounds. As a serious artist with no interest in rock star glory, Cope presumed he’d eventually find the right voice to sing his songs.

The right voice was found. By playing in local venues, the writer/producer ultimately met the only singer equipped to narrate the idiosyncratic stories. That voice resided within his own soul. The writer/producer/singer were one, living inside the wide confines of Cope’s vision.

On record the vision is first expressed in Citizen Cope, the debut album from 2002. The artist is still finding his footing and, although his trademark poetry is firmly in place, this is the only record where the production isn’t entirely his own. The aural environment is more elaborate, the sound not yet reduced down to the common denominator that we come to know as Cope. The theme, though, is clear—it’s “Contact,” the cry for a connection to a world that is at once bewildering, necessary, and fraudulent. The issues are serious. “You’ve got them crooked politicians,” he writes, “eating up the treasury and taking our cash to spend on the prisons while the youth they fast.” The groove is insistent. “Let the Drummer Kick” is the name of the song that says, “You’ve got to bust through…mass confusion, solution, conclusion, inspiration is what pulls you through.” Busting through, pulling through, getting through to “Salvation,” a story in which Judas shows up in DC and takes aim at the singer’s soul.