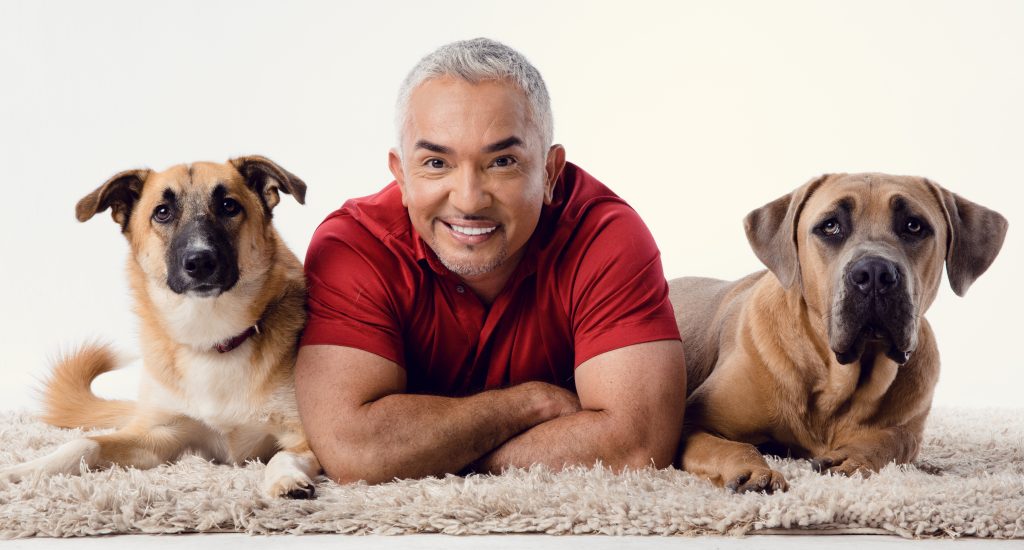 Dog Behaviorist and Star of the Hit Series

Cesar Millan is the star of the new 2017 television series “Cesar Millan’s Dog Nation” on Nat Geo WILD and original host of the “Dog Whisperer” series. Cesar is the pet care industry’s most recognized and sought-after authority working in the field of dog care and rehabilitation.

Cesar Millan will reveal the secrets of happier, healthier relationships between humans and their canine companions in his exciting live show. Cesar will share his philosophies and methods, then present examples via live training demonstrations with multiple dogs from local rescues. His famous four-legged companions, “Junior” and “Benson,” will also join Cesar on stage. From his years of experience, Cesar will show that for a transformation to take place in a dog, the real transformation quite often needs to take place in their human companion first. You’ll be amazed and inspired by the simplicity with which Cesar’s Way can bring harmony and balance into your and your dog’s lives.

Through Nat Geo WILD’s “Cesar Millan’s Dog Nation,” Cesar and his eldest son Andre Millan crisscross the United States to work with non-profit organizations and dog lovers that are helping to save millions of dogs around the country. Cesar delivers his unmatched ability to rehabilitate K-9s who need him the most and reach communities calling for his help. The series presents new challenges for Cesar as he does more than just help dog owners with their pets’ behavioral problems. He uncovers inspirational K-9 stories and connects with those working to make our world a better place for humans and dogs, including organizations helping veterans and their service dogs, community-run animal rescue groups training K-9 police dogs and therapy dogs that help children with autism. From canine heroes to issues affecting local dog communities, no pup is off limits as the Millans hit the road to help dogs across the country.

During production of “Cesar Millan’s Dog Nation,” the father and son duo traveled to seven different cities across the country to find the most unbelievable and inspirational canine stories America has to offer. They met with local hero dogs from Philadelphia, Chicago, the District of Columbia, St. Louis, San Francisco, San Diego and Los Angeles. www.dognation.com

Cesar is the author of the New York Times #1 Bestseller Cesar’s Way, the New York Times Bestseller Be The Pack Leader, Dog Whisperer with Cesar Millan: The Ultimate Episode Guide, A Member of the Family, How to Raise the Perfect Dog, Cesar’s Rules, and A Short Guide to a Happy Dog. He has also generated numerous instructional DVDs and CDs.

His website, Cesarsway.com, is the largest dog-dedicated website in the U.S. with over 1.2 million unique views per month. The site gives insights into dog behavior issues, rescue and adoption, and health issues.