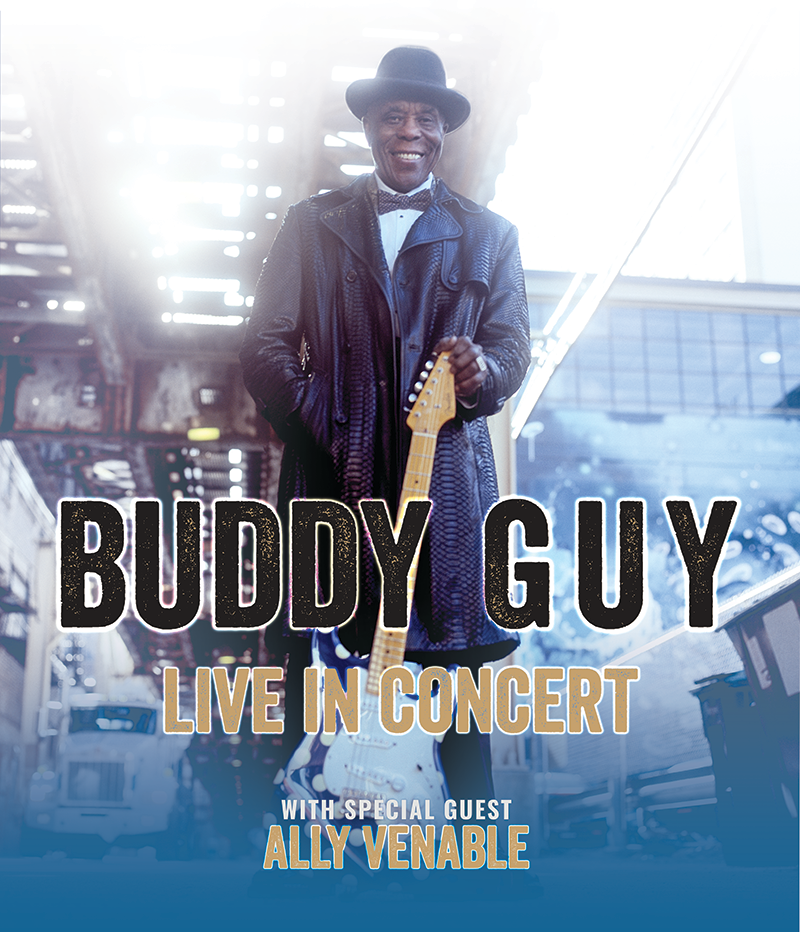 The title of Buddy Guy’s latest album says it all: The Blues Is Alive and Well. The legendary blues artist’s eighteenth solo LP and follow-up to 2015’s Born to Play Guitar showcases his raw and unadulterated sound, its fifteen tracks a true pleasure for aficionados and genre newcomers alike. “I got children and grandchildren who didn’t know who I was, but nowadays we can play outdoor concerts and see kids that are eight, nine, twelve years old coming to me and saying, ‘I didn’t know who you was, but I read what Eric Clapton said about you,'” Guy explains when discussing his mindset around the new record. “I’m always trying to make an album that someone accidentally plays where some kid hears it, picks up a guitar, and helps keep the blues alive.”

And it only takes one listen to The Blues Is Alive and Well to realize that Guy’s mission has been more than accomplished here. The record is arriving on the heels of a spate of high visibility for the 83-year-old performer: at the 2016 Grammys, he picked up a trophy for “Best Blues Album” honoring Born to Play Guitar, and that same year he hit the road for a U.S. tour opening for Jeff Beck. In addition to bringing the house down for a recent sold-out performance commemorating the closing of New York City’s B.B. King’s Blues Club and Grill, he recently appeared on David Letterman’s Netflix talk show My Next Guest Needs No Introduction. A truly restless and energetic performer, The Blues Is Alive and Well is the latest triumph in an already-legendary career.

The Blues Is Alive and Well began to come together when Tom Hambridge, frequent Guy collaborator and producer, came to the man with a collection of songs he figured would be perfect for a new full-length. “He’s like some of the older guys I used to play with,” Guy enthuses about working with Hambridge. “When you play with a band for ten or twelve years, they almost know what you’re gonna do. He’s the type of guy who feels what I’m gonna do. Even in my early Chess Records days, you had Willie Dixon and several other guys affiliated with those hit records, and this kid just has that feel too. He brought the songs in, and hopefully we did a good job.”

And how: The Blues Is Alive and Well‘s fifteen tracks feature pristine production without losing the signature lived-in grit that Guy’s been known for his entire career, from the low-slung riffage of “Bad Day” to the squealing solos of “Somebody Up There.” Guy sounds every bit as vital and youthful here as he did dating back to his early collaborations with the late Junior Wells, and it’s inspiring to hear a veteran artist laying down the blues with such gusto.

Among the contributors to The Blues Is Alive and Well: young gun James Bay, who joins him on the aching “Blue No More,” as well as Rolling Stones frontman Mick Jagger, who contributes to the stomping barroom rambler “You Did the Crime.” “Mick made a comment to me when he heard the song: ‘Is that my voice? I didn’t know it was still that strong,'” Guy states. “Before the late Junior Wells passed away, we did a whole tour with Mick. They exposed us a lot. I owe a lot of things to those guys, because they put us in places that we hadn’t been, and they haven’t forgotten that. We got a relationship between us. Whenever they come to town, they stop in the loudest blues club in Chicago and call me, and I’ll go in the kitchen and fix us something. We still have a lot of fun.”

And Jagger’s not the only Rolling Stone to hop on The Blues Is Alive and Well: Keith Richards contributes to the warm “Cognac,” as does Jeff Beck. “Those guys have been my friends before they got famous,” Guy reminisces while discussing his rejoining with old friends. “I went to England and those guys looked at me while I was playing a Stratocaster and said, ‘Don’t you know a Stratocaster can’t play the blues?’ I said, ‘What do you mean?’ It was a joke, because it was a country/western instrument before that—it wasn’t supposed to play the blues. We all bought Stratocasters after that.”

And even as Guy pushes forward with his astounding career, he’s careful not to forget his late contemporaries who inspired him along the way. “I went to sleep yesterday and woke up and all the great blues players are no longer with us. Muddy, Wolf, B.B.—they’re all gone. Before they passed away, when they were in their prime, we used to have a drink and a laugh and talk about how when one of us is gone, the others have to keep it going. I’m trying to do something to keep this music that I love so well alive.” And with The Blues Is Alive and Well, it’s clear that the music—and Guy himself—ain’t going away anytime soon. 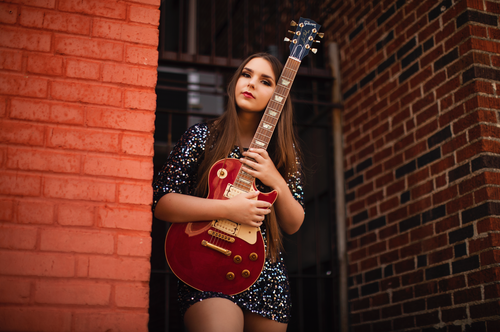 This is no time for faint hearts. The pandemic might have silenced the music scene, shuttered the live circuit and divided artists from their fans. But with Heart Of Fire, Texas’s favourite new gunslinger Ally Venable is coming off the ropes swinging. Defying dark times and rolling up the amps, this fourth release from the acclaimed singer-songwriter is a record to rattle your speakers and signpost better times ahead. “My vision was to really spread a positive message of love,” says Venable. “The world needs that right now.”

If Heart Of Fire finds Venable giving the globe some much-needed love, then the feeling is entirely mutual. Still in her early twenties, the guitarist’s breakneck two decades have moved as fast as her fingers, her path winding from childhood church choirs to the teenage influence of local heroes like Stevie Ray Vaughan and Miranda Lambert. Early releases No Glass Shoes (2016) and Puppet Show (2018) earned her international fans, Top 10 chart placings and ETX Awards, but it was 2019’s #2 Billboard-charting Texas Honeyand house-rocking sets on that year’s Blues Caravan tour that sent her stratospheric. Now, with Venable’s fanbase snaking further around the block every time she blows into town, Texas roots icon and Texas Honeyproducer Mike Zito is in no doubt: “Ally is the future of blues and the crossover music of American roots-rock.”

Not even a global pandemic could derail her momentum. Working at the Bessie Blue Studio in Stantonville, Tennessee last February with world-renowned producer Jim Gaines, Heart Of Fire finds Venable laser-focused on her songcraft, challenging herself to write with unguarded honesty, even if it hurts. “On this album, I really wanted to create a tone of overcoming your struggles and persevering through them,” she explains.

Like any battle, this record gets loud. Anyone who has left an Ally Venable show with ringing ears will come expecting rip-it-up guitar work, and Heart Of Fire is a lovely way to burn. In a world of electronic pop, this old-soul gunslinger riffs up a storm on the Led Zeppelin-worthy sting of Hard Change and Do It In Heels, revs up the slinky hook of Sad Situation and drives the title track’s intro with a heavy-booted wah lick. “That song is about being in a state of sadness,” she explains, “and someone comes along and brings you out of it, and then nobody is able to take out your flame.”

The only player who could follow her fretwork is special guest Kenny Wayne Shepherd, who tears up Bring On The Pain. As Venable says: “That song is about loving someone, staying true to yourself during the bad times and saying, ‘No matter what’s going on, my love won’t change’. Kenny is one of my heroes, so I’m very honoured he said yes to be a part of the song.”

While nobody is better at squeezing fresh juice from the blues-rock genre, Venable’s songwriting frequently forks into leftfield. There’s the chain-gang stomp of Hateful Blues, its lyric cursing a cruel lover (‘Oh, my love has been abused/and that’s why I’ve got these hateful blues’). There’s the pace-changing cover of Bill Withers’ classic Use Me, reborn here with congas, rubberband bass and a grooving lick. And don’t miss the impossibly wistful Road To Nowhere, with Southern rock great Devon Allman dovetailing with Venable on the chorus harmonies. “Devon jumped right into the song, elevated it and brought it to life,” she remembers. “His vision for the song aligned perfectly with mine, and I’m so happy with how it turned out.”

The same could be said for Heart Of Fire. Defiant, passionate, honest and raw, this is the record these times demand, from an artist who refuses to wait for the storm to pass, but prefers to dance in the rain. “My goal for this album was to give an outlet for people,” Venable considers. “That’s really where the core of these songs comes from…”