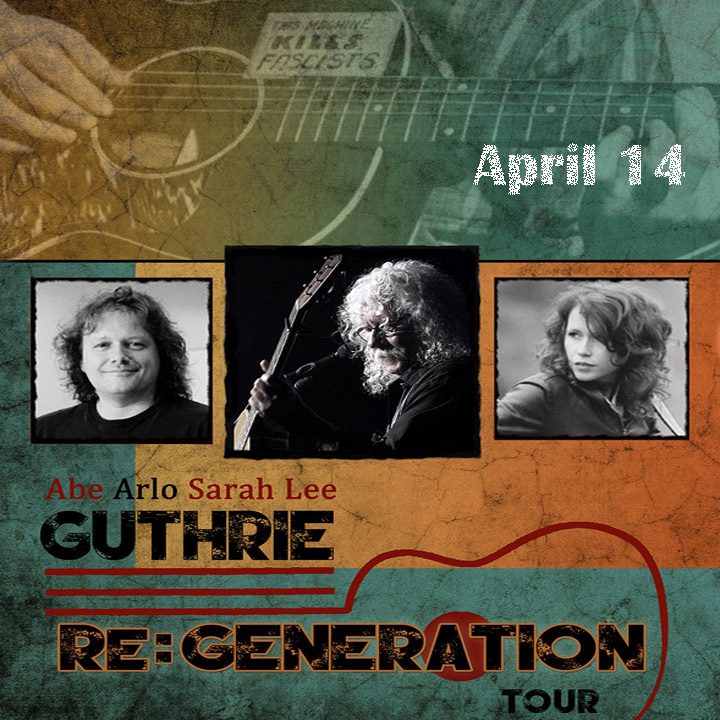 Arlo Guthrie’s father Woody hoped one day to have enough kids to form a family band, traveling the country and singing their songs together – Generations. The Re:Generation Tour is the spirit of an American family making music together. Alro’s children Abe and Sarah Lee will be joining their dad to present music of the Guthrie Generations.

Arlo Guthrie has been known as a prolific songwriter, social commentator, master storyteller, actor and activist. Born in Coney Island, New York in 1947, Arlo is the eldest son of Marjorie Mazia Guthrie, a professional dancer with the Martha Graham Company and founder of The Committee to Combat Huntington’s Disease, and America’s most beloved singer/writer/philosopher/artist Woody Guthrie. Arlo has become an iconic figure in folk music in his own right with a distinguished and varied career spanning over fifty years.

Growing up Guthrie, Arlo was surrounded by such renowned artists as Pete Seeger, Lee Hays, Ronnie Gilbert, Sonny Terry, Brownie McGhee, and Ramblin’ Jack Elliott to name only a few. Not surprisingly, Arlo drew from these influences and he in turn became a delineative figure bridging generations of folk. He and Pete Seeger created a legendary collaboration that was sustained for over forty years. The last Pete & Arlo show was in November 30, 2013 at Carnegie Hall, only a few months before Pete passed away at the age of 94.

In 1965 a teenaged Guthrie performed a “friendly gesture” that proved to be fateful. Arlo was arrested for littering, leading him to be deemed “not moral enough to join the army.” Guthrie attained international attention at age 19 by recounting the true events on the album Alice’s Restaurant in 1967. The Alice’s Restaurant Massacree, an 18 minute and 20 second partially sung comic monologue opposing the war and the backward reasoning of authority, has become an anti-establishment anthem and an essential part of Thanksgiving on rock stations receiving worldwide airplay. Alice’s Restaurant achieved platinum status and was made into a movie in 1969, in which Arlo played himself, by the esteemed director Arthur Penn. 1969 also brought Arlo to the rock festival of the ages, Woodstock. His appearance showcased Arlo’s chart-topping Coming Into Los Angeles, which was included on the multi-platinum Woodstock soundtrack and movie. 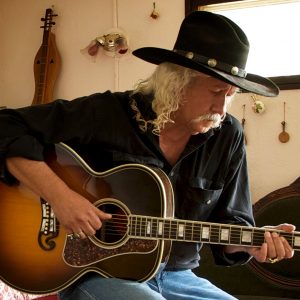 Beginning the seventies with a number of albums for Warner Bros., Guthrie helped set the standard for the singer-songwriter genre burgeoning at the time. Perhaps the best known is Hobo’s Lullaby (1972) featuring a diverse body of work. Most notable is the definitive version of Steve Goodman’s The City of New Orleans that was a hit on all major charts. Another critically acclaimed album that charted on Billboard was Amigo (1976), which includes Massachusetts, honored in 1981 as the official State Folk Song.

Taking complete creative control, Arlo left the major record label system in 1983 to fulfill his career as a truly independent artist, and established Rising Son Records, one of the first indie labels in existence. Rising Son is still in active operation serving as his record and production company. To date Rising Son Records has released over twenty titles of Arlo’s, both all new material and re-mastered versions of his classic records including the Grammy nominated Woody’s 20 Grow Big Songs (1991) featuring Arlo and his family, and In Times Like These (2007), recorded with the University of Kentucky Symphony Orchestra. The latest offering is Here Come The Kids (2014), recorded at the Old Town School of Folk Music in Chicago, IL, from the previous tour of the same name, celebrating the centennial of his father Woody Guthrie.

In addition to his musical career, Guthrie is an accomplished actor with numerous television appearances. Arlo has had recurring roles in two major network television series (The Byrds of Paradise and Relativity), and feature films, the aforementioned Alice’s Restaurant and Roadside Prophets (1992). Arlo is the author of three children’s books and a distinguished photographer, showing his works in selected galleries.

Inspired by his parents’ activism, Arlo bought the old Trinity Church (“the” church) that is now home to The Guthrie Center and The Guthrie Foundation. Named for his parents, The Guthrie Center is a not-for-profit interfaith church foundation dedicated to providing a wide range of local and international services. The Guthrie Foundation is a separate not-for-profit educational organization that addresses issues such as the environment, health care, cultural preservation and educational exchange. In 2009 Arlo was awarded the ASCAP Foundation Champion award for making a difference through social action on behalf of worthwhile causes and demonstrating exceptional efforts in humanitarianism.