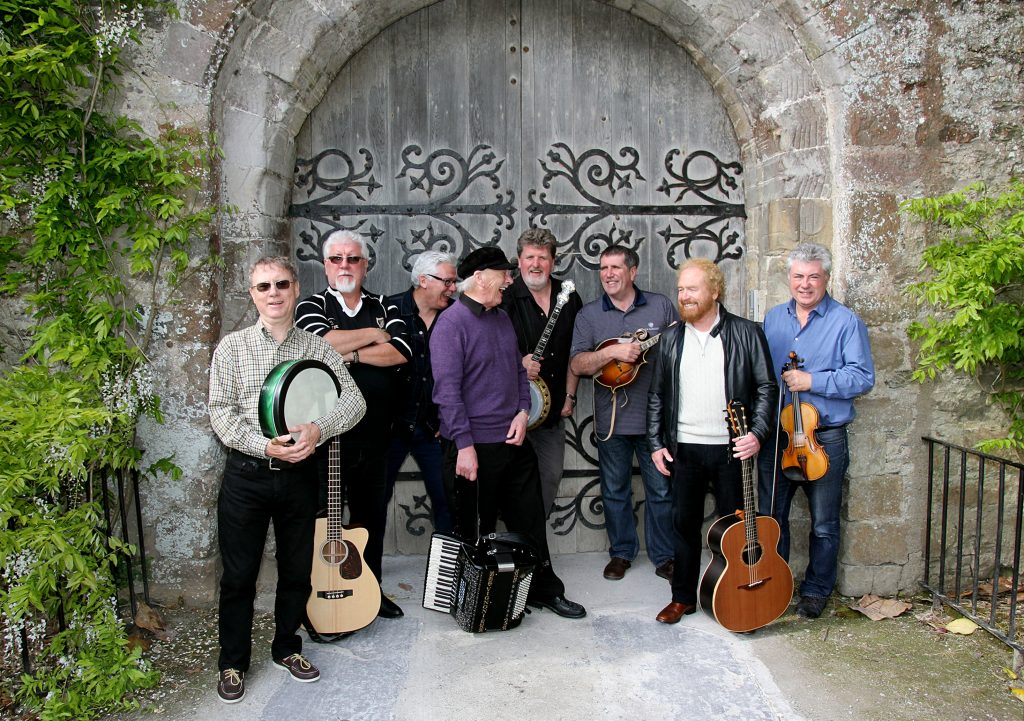 THE IRISH ROVERS have charmed and entertained audiences around the world with their exciting stage shows for nearly 50 years. The past year has seen them excite yet another generation by returning to the radio airwaves, expanding their visibility on YouTube and returning to the small screen with two television specials in the last two years.

On the heels of their nomination for the Irish Music Association’s Tommy Makem Award, which honors their philosophy, and traditional approach to Irish music, the Rovers began their “Long Goodbye Tour”. The band hopes to sing a proper farewell to all those they have entertained for these many years. After more than 40 albums released in North America and many more internationally, the Irish Rovers continue to receive rave review for their recordings and performances.

“Fueled by passion, talent, history and song the musical legacy of The Irish Rovers continues to lead the way for many of today’s folk and Celtic musicians.”

The Irish Rovers recently released, “Drunken Sailor” CD (Rover Records), and the DVD/television special, “The Irish Rovers Christmas”. The release of the CD was spurred on by over 5 Million hits of their usual show-closer, Drunken Sailor. As well as featuring the title track, the album includes the   single, “Whores and Hounds” as well as a tribute to the great ship, Titanic on its 100th anniversary. The DVD and television special was filmed in Canada on the ski slopes and in the streets and pubs of Banff National Park, and includes their live Christmas concert filmed at Chatham, Ontario’s historic Capitol Theatre with musical guests from Ireland, Morris Crum, Patrick Davey, Gerry O’Connor, with Canadian/Irish Tenor John McDermott and guitarist Jason Fowler.

“Irish Rovers celebrate a bonny resurgence…From the recent resurge in popularity of The Irish Rovers, it would seem the lads themselves have returned to their glory days, and are still charging.” The Morning Call, 2012

On their last two Sold Out concert tours the band garnered rave reviews, attracted the attention of a new younger audience, and were touted in the press as “internet sensations” for their multi-million YouTube fans, revamping their website, uploading more videos to YouTube and becoming active on Facebook and Twitter.” As Global TV stated, “They’re getting a new generation of fans, so in their case you can teach an old dog new tricks!”

In 2010 The Irish Rovers released the CD, “Gracehill Fair” (Vancouver Island Music Award – Song of the Year), with an extensive tour, and the DVD/television special, “Home In Ireland” which was filmed entirely along the northeast coast of Ireland, and at their Belfast Waterfront Hall concert .

The story of the Rovers begins in 1963 in Canada, where the 16-year old George Millar and 23-year old Jim Ferguson, both new emigrants from N. Ireland, met in Toronto at an Irish function. They ended up singing together ’til dawn; and so the Irish Rovers were launched. They performed as a duo until George’s cousin, Joe Millar, immigrated to Canada the following year. Joe, who sang traditional ballads and played button-key was recruited as he stepped off the plane. George’s musician father Bob Millar, who was also button key accordion player, became the band’s first manager. For the next several months he guided the new band which started their career playing folk song festivals, clubs, hootenanys, The Port o’ Call, and Toronto’s Royal Alexandra Hotel.

George, Jimmy and Joe left Toronto for Calgary to stay with brother Will who was singing folk songs at Phil’s Pancake House which led to a daily children’s TV show, “Just 4 Fun”. After their first disastrous television appearance, the four Rovers headed off to “Americay”, landing in at San Francisco’s famous folk club, “The Purple Onion”, where they ended up headlining for an unprecedented 22 sold-out weeks. The folk clubs of California became the learning grounds for the young Rovers, and (through old-fashioned hard work and a wee bit of Irish luck) they were offered a recording contract with Decca Records.

The success of their debut album, “The First of The Irish Rovers”, lead to their second album, “The Unicorn”. At this time, the addition of Wilcil McDowell, enhanced their sound. In 1968, the predecessor of the Juno’s named The Irish Rovers, “Canada’s Folk Group of the Year”, and the following year, they received a Grammy nomination for  “Folk Performance of the Year”.

Through the 1970’s and early 80’s, the Rovers brought their magic to television guest starring in several television programs, and then starring in three of their own television series; “The Irish Rovers Show” for the CBC, also “Party With The Rovers”, and “The Rovers Comedy House”. They were also on Global Network in conjunction with Ulster Television in Ireland, which was syndicated around the world. The Irish Rovers brought us the best entertainment of the day, and brought Ireland into living rooms across North America.

At the start of the 80’s, The Rovers’ magic worked on another unknown novelty song. “Grandma Got Run-Over By A Reindeer”, became an immediate seasonal anthem, and rose to the top twenty within a week of radio play. The Rovers also soared to the top of the pop and country charts with “Wasn’t That A Party”, which was written by their friend, Tom Paxton, after he witnessed one of the band’s famous post-show parties. It has gone on to become an international anthem of good cheer.

Prime Minister Pierre Trudeau personally asked the boys if they could “please become Canadian” so that they could officially represent Canada throughout the world. Since then, they have represented Canada at no less than five world Expos, and in recognition for a quarter century of contributions to the International music world, The Irish Rovers won the Performing Rights Organization’s (PROCAN) ‘Harold Moon Award’.

In ’93 the band established their own record company, Rover Records as their production of albums wasn’t about to slow down, and they desired the freedom that as a younger band, they could not afford. Unlike many of their big hits, the band’s own compositions all have a very traditional Irish sound and tell a story of home, whether it’s about a lost love, a sailor on leave, or the simple good taste of a Guinness. Rover Records has put out twelve albums so far, with another on the way.

With original members George Millar, and Wilcil McDowell, the band includes John Reynolds and Sean O’Driscoll who have been playing with the band for near 25 years. Will Millar left the group in 1994, and sadly Jimmy Ferguson passed away in 1997. In 2005 Joe Millar retired to the golf course, while his son, Ian took up the family ranks. All members hail from Ireland.

The Irish Rovers are still passionate about performing and will continue to tour and entertain their legions of fans. Like the Unicorn, the Rovers are legendary and magical, and a good time is guaranteed for all.