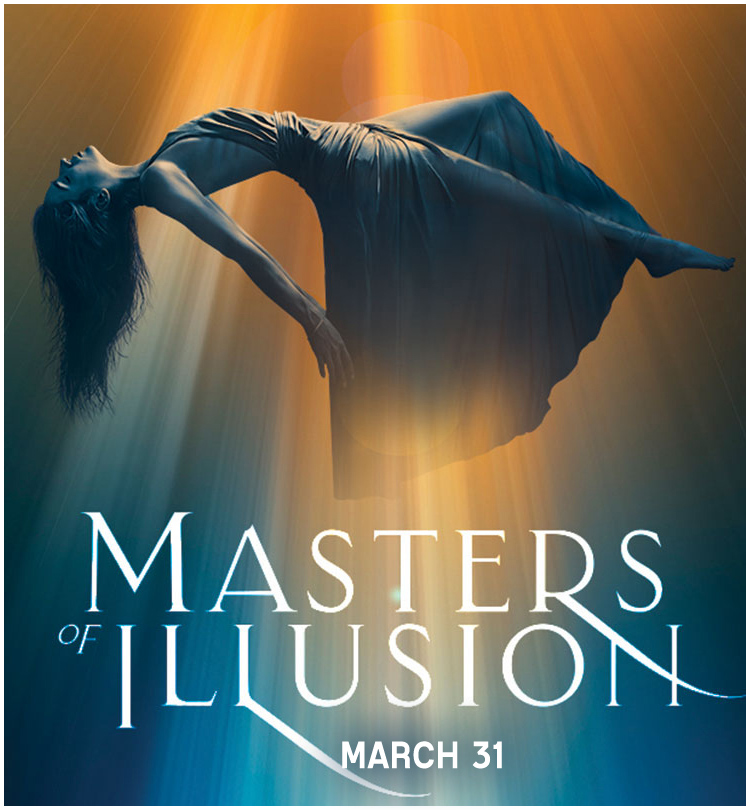 These cutting-edge illusionists perform sleight-of-hand, perplexing interactive mind magic, comedy, dangerous escapes and large-scale illusions. These modern masters of illusion display skills that have taken a lifetime to perfect, and audience members will be baffled by their astounding skills.

Masters of Illusion, America’s largest touring magic show featuring the greatest illusions of our time will tour the US and Canada in 2018 and will star magicians from The CW hit primetime television series, Chipper Lowell, Jarrett & Raja, Michael Turco and Naathan Phan.

For over 20 years, Chipper Lowell has been bringing his odd brand of infectiously amusing mayhem to audiences around the world at performing arts center, theaters, cruise ships, casino showrooms and corporate events. He has been described as an “artistic cyclone of talent and comedy” by the press. He has been honored with “Comedy Magician of the Year” twice, “Specialty Act of the Year,” and was listed among the “Top Funniest Magicians Performing Today” by MAGIC Magazine. Lowell has performed on multiple occasions with the Masters of Illusion Live Tour and has appeared several times on the hit TV series, Masters of Illusion, which airs on The CW.

Jarrett & Raja – Direct from the great casinos of the Las Vegas Strip and billed as “Master Illusionist & Piano Genius,” Jarrett & Raja have entertained millions worldwide with their amazing and unique blend of magic, music and comedy. Trained at The Juilliard School, Jarrett & Raja’s first show was in New York City. The two were semi-finalists on NBC’s America’s Got Talent and appeared in 2016 on ABC’s Shark Tank. They have headlined in 2017 in two major Vegas casinos and have appeared on CBS’ Late Show with Stephen Colbert. They have also been featured on all seasons of the hit CW TV series, Masters of Illusion.

Michael Turco fell in love with the mystery of magic when he was just five-years-old. Spending his summers just miles from the strip in Atlantic City, Turco saw every magic show in the area and was intent to master each trick and illusion on his own. He has had his own show in Las Vegas at Planet Hollywood casino and brought a little bit of Jersey to the strip. The press describes Turco as “a natural born talent… a true success story.” Michael Turco has been with the Masters of Illusion tour for several years now and has appeared multiple times on the award winning TV series Masters of Illusion on the CW network.

Naathan Phan’s first love in life was, and still is, magic. He became enamored by the art at the tender age of five when his grandfather showed him his very first magic tricks. Although his magical genesis may sound a bit cliché, his magic is anything but. Naathan Phan hooks you with his Robin Williams paced wit and humor, perfectly punctuated by his well-practiced prestidigitation, and geared towards your audience, whatever age(s) they may be. Phan has toured with the Masters of Illusion live show as well as performed on The CW hit television series, Masters of Illusion, multiple times. Aside from being a magician, Phan also is adept at doing celebrity impressions.