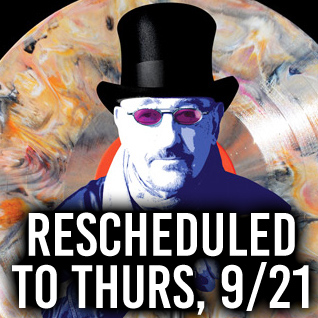 Please note, this show has been rescheduled due to illness, to Thursday, September 21, 8pm:

“Apologies to our fans in Napa, CA, but we regret to inform you that tomorrow night’s show at Uptown Theatre Napa has been rescheduled for this Thursday, Sept. 21, 8pm. Dave has come down with the summer flu and is on his way home. All previously purchased tickets will be honored. Dave apologizes to everyone for any inconvenience, but needs to rest his voice and fully recover for the Napa show and looks forward to continuing the rest of the tour.”
If you cannot attend Thursday’s show, refunds will be available at place of purchase. If you’re a Ticketmaster customer and need a refund, visit the account page on their website, or call 800 653 800. If you bought your tickets from the box office and need a refund, you’ll need to come down to the box office with your original tickets before the rescheduled date.
Apologies for any inconvenience. If you have any questions, please call (707) 259-0123 ext. 6.

Dave Mason, the legendary British rocker and co-founder of psychedelic band Traffic, is bringing his “Alone Together Again” tour to the Uptown Theatre, September 17!

Best known for his soulful voice and unsurpassed guitar playing, and with a career spanning five decades, British singer-songwriter, guitarist and Rock and Roll Hall of Famer Dave Mason has worn many hats over the years. Mason has played, recorded, and performed with notable musicians such as Paul McCartney, George Harrison, Eric Clapton, Michael Jackson, Steve Winwood and Fleetwood Mac. In 2004, Mason was inducted into the Rock and Roll Hall of Fame as a founding member of Traffic.

Hailing from Worcester, England, Mason first found fame with ‘60s psychedelic rock group Traffic – writing hit tunes like “Feelin’ Alright” and “Hole in My Shoe.” In the late 1960s, Mason played acoustic guitar on Jimi Hendrix’s iconic version of Bob Dylan’s “All Along the Watchtower.” In 1970, Mason wrote his solo album Alone Together, which has become one of America’s most beloved classic rock albums. In 1977, he recorded “We Just Disagree,” a solo hit in the U.S. written by Jim Krueger, which has also become an American radio playlist standard.

Nearly 50 years later and more than a dozen solo albums in his repertoire, Mason will revisit his classic masterpiece Alone Together on his new “Alone Together Again” U.S. tour. Along with his band members Johnne Sambataro, Alvino Bennett and Tony Patler, the tour will feature singer extraordinaire Bekka Bramlett, daughter of Delaney and Bonnie, the celebrated duo who toured with Mason in the 1970s and had a #2 national hit with “Only You and I Know.”

The “Alone Together Again” show will include fan favorites like “All Along the Watchtower” and “Feelin’ Alright,” in addition to the album’s classic songs. Photos and firsthand autobiographical commentary will complement the guest experience, making this series of performance by a living classic rock legend one of rock ‘n roll history’s most significant albums a truly once-in-a-lifetime experience.

New date: 9/21, Thursday
Rescheduled due to illness
Ages
12+ (under 16 with adult)
Buy Tickets